It had to happen sooner or later, we’ve got to come to expect this type of thing happening more and more as time moves on. We been struggling with covid for almost a year so it’s no surprise that bands are releasing material that have been completely conceived in the global pandemic, written, recorded and released in lockdown.

Immortal Guardian who hail from, well, the four corners of the globe; with Gabriel Guardian (guitars/keyboards), Carlos Zema (vocals), Justin Piedimonte (drums) and Josh Lopez (bass), living and working in Brazil, Canada, Vegas and Texas. Together they have collectively adhered to social distancing to bring us 'Psychosomatic'. With titles of songs such as 'Lockdown' and 'Self Isolation' the subject matter of this concept album have been like the news for the last twelve months, dominated by the pandemic. 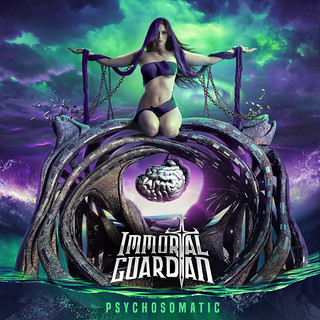 If you’re not sick to the back teeth of yet more covid related media and you like your metal precise, exact and explicit, this could be for you. Each song starts with a massive guitar flourish, the keyboards are not far behind, mimicking and playing in parallel, note for note with every guitar part. The songs will then feature a "tighter than a pair of budgie smugglers on a sun tanned 80’s holiday maker" riff that has no room to manoeuvre. The vocals are elongated over each line but may only contain two or three words. It saves on writing lots of lyrics and shows off Zema’s pipes to perfection. Shredding solos and drum fills that leave no gaps and you kind of get the picture!

There is a ballad, 'Candlelight'” and a longer song 'Find a Reason'. 'Read Between the Lines' is the obvious single, and the micro second meticulous execution is in full effect during this track. 'Clocks' deviates slightly from the path, a slightly trippy, sounding riff act as bread, with a fast as hell filling in this sandwich of a song.

This summons up story telling of a modern age. A document to the recent past that we could reminisce over yet, sadly, we are still in the eye of the storm. It's something the band I’m sure were not counting on when they put pen to paper and started writing this album.