Album Review: Crown - The End Of All Things
Reviewed by Matthew Williams

Think of running through a gloomy forest being chased by someone, or drowning in an ocean, lungs filling with water, as you gasp for air. Picture that and then the latest offering from Crown would be the music you hear; it is the perfect soundtrack for a Nordic Noir series!

The slow drumbeat of opener 'Violence' leads you towards a dark place, the hypnotic vocals tempting you down several paths and the anticipation builds more on “Neverland”, the tempo growing like a slow jab to the temple. The techno beat on 'Shades' works exquisitely with the snarling vocal, to keep your head banging. 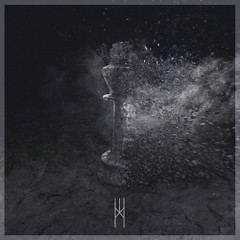 Crown have clearly enjoyed making this record, and have taken risks, venturing into bleak, dark and moody territories, accompanied by catchy dance hooks and impressive tempo changes, with haunting lyrics like, “Let me dig in your dreams” on the gloomy 'Illumination' making the listener feel like they are being stalked, whilst the peaceful serenity of 'Nails' is awoken by crunchy guitar riffs and mesmeric beats.

The head bopping dance beat on 'Gallow' brings a smile, the echoey vocals feeling like you are in a small underground club, being blinded and captivated at the same time, then “Extinction” makes you feel like the band are enjoying being voyeurs.

'Fleuve', feels like a dream sequence, and leaves the listener with endless, evil thoughts but it’s a wonderfully crafted song and leads into 'Firebearer' dark, sinister vocals, working in harmony with the musicianship, before the tortured vocal kicks back in, damn this is so good.

And finally, we’ve reached 'Utopia', a gentle keyboard opener with stark vocal slowly builds the song and with the chilling lyrics of “run for your life” leaves this dramatic song as a fitting finale for this engrossing record.