If you're unfamiliar with Wednesday 13, it's a modern take on the Alice Cooper model from back in the 70s. Harder, faster and with more sneer in the voice, however the ethos is there to be seen and heard. The more sinister music of the bands recent releases are rested for this E.P. and we return to the 'Look What the Bats Dragged In' material from a few years ago. High energy and up-tempo rock and roll with a bit of horror theatre thrown in. 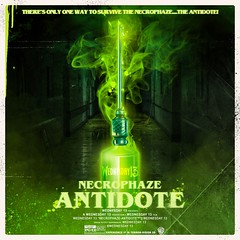 In these extremely difficult times where we need to be kind to everyone and have consideration for everybody's feelings, Wednesday 13 comes storming in with a metal spike driven to the heart of that statement with the song 'Your Mother Sucks Cocks in Hell'. As you would expect, a vicious little ditty with plenty of attitude. Three minutes later we get the second track, 'Screwdriver 2 - The Return'. Again considering everyone's feelings at this time, now is the time to have a song about a gentleman who likes to take drills to other people's heads.

Still in the vicious dirty rock and roll arena, we're 5 minutes into the E.P. and its gone by in a whirl before the next track which is a cover song. Wednesday 13 has the rare talent of, when covering tunes, giving us the feeling we know the song before we recognise it. Once we recognise it we have a light bulb moment to ourselves “oh it's that song. Sounds nothing like the original yet I know it”. The INXS song 'Devil Inside' gets the Wednesday 13 treatment. Harder and more lively than the original, almost unrecognisable apart from the melody and the chorus and needless to say, better than the original. The E.P. closes out with a heavier, slower and darker song with more keyboards fitting for the Gary Numan cover. Yet it still has that raspy voice and punk rock attitude just with the lights turned off.

These are indeed troubled times and everyone needs to be aware of their own and other people’s feelings. Be kind all the time. If you want a holiday from that for fifteen minutes go and check out Wednesday 13's 'Necrophaze - Antidote'; released on April 16th via Nuclear Blast Records.