So, what do we have here, a bit of symphonic power metal for you? Well, yes and no. The prolific Italian based Frozen Crown return with their third full length in four years, fronted by the two longest standing members Federico Mondelli (Guitars, Keys, Vocals and songwriting) and Giada "Jade" Etro (Lead Vocals), they are joined by new members, Fabiola ‘Sheena’ Bellomo (Lead Guitars), Francesco Zof (Bass) and Niso Tomasini (Drums), although I’m not sure if these three actually appear on the album, that information is a bit vague, although they certainly appear in the ‘taster’ video. ‘Winterbane’ like album number two; ‘Crowned in Frost’, the band have toned down considerably the symphonic elements to their sound from the proceeding release, and concentrated more on the metallic fundamentals, resulting in a more aggressive and heavier attack. Not that the band have altered their basic approach of fast, melodic fist pumping metal, it’s just this time round, the keyboards and the like are slightly more in the background, and the Guitars are more up-front. For an old thrasher like me, it’s a great move, but I also think that existing fans will also enjoy the added ‘bite’ that this slightly altered approach brings. 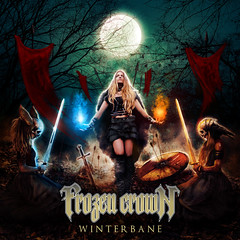 Take opener ‘Embrace the Night’, whereas on album number one ‘The Fallen King’, this song would have had a coat of glossy synths, fighting for space in the mix with the guitars, now the keyboards take more of a back seat, and instead add texture and depth rather than taking over proceedings, and to my ears to the benefit of the material. Second and first singles are up next, in that order, the former ‘Towards the Sun’ starting with a nice chugging riff and some ‘Maiden’ like melodies, before Jade’s vocals add a beautiful soaring refrain, while ‘Far Beyond’ opens with classy harmony guitar, before the band puts it foot down, with a really driving instrumental part. ‘The Lone Stranger’ is a bit more thoughtful, with a nice galloping riff, but still with lots of catchy guitar melodies and another wonderful vocal arrangement. One of my current favourites though is the epic ‘Fatal Crown’, this a thrashers dream, the band really flexing their metal muscles and after a classy into, the band kicks into top speed, even incorporating blast beats and harsh male vocals to counter the phenomenal lead vocals, the contrast is just wonderful. Just to prove their versatility ‘The Water Dancer’ has a more playful groove with a folk influenced feel, that doesn’t feel forced and works really well. ‘Angels in Disguise’ is perhaps the tune that is most like the older material and has the most symphonic parts compared to the other songs. ‘Night Crawler’ is a fun and fairly faithful cover of the Priest track from ‘Painkiller’ and sets us up nicely for the album climax. The two minute ‘Tales of the Forrest’ is an introduction instrumental for the nine minute ‘Blood on the Snow’ where the band incorporate everything that has gone by previously and then add some, to create what is probably the best track on the album. Starting with a Celtic inspired melody, before the riffs pick up momentum, after a few more sections those harsh male vocals make another appearance which makes it all the more powerful when Giada comes in.

The production is good, the vocals are recorded tremendously well, as are the guitars, but I do feel like the drums are a bit artificial and buried when the music gets very busy. But that’s really my only complaint. This is a very confident and extremely well-crafted metal album, which will appeal to a broad genre of fans, from classic, through power and symphonic, through to melodic death and thrashers. Another band to add to that growing list that have very much pleasantly surprised me already this year. Excellent.