Gojira have been around long enough now that they have seeped into the heavy metal’s fans consciousness.  You ask anyone about the exciting bands on the scene today and Gorjira are up there at the top of most people’s lists. Over the past twenty years – yes they have been around that long now – they have slowly built themselves into an epic, festival headlining outfit, worthy of gracing the biggest stages in the world.

This April will see the French quartet release their seventh studio album ‘Fortitude’ possibly the biggest, most expansive album of the bands career and no doubt one that will drive them a step or two closer to super-stardom!

As the drum and wailing guitar intro to ‘Born For One Thing’ explodes into the main body of the beastly opening track the listener is immediately drawn into their sound, their world. Fluctuating between styles from the haunting echo’s of passes through the death metal riffing and back again the band are not afraid to mix it up and create a style all of their own. 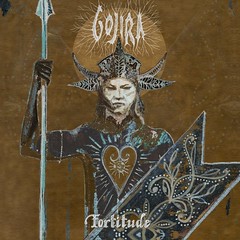 As is often the case, the band likes to fight for a cause and thus far in their career they have been spot on with the topics they have been highlighting. The second track on the album, ‘Amazonia’, will already be very familiar to many fans, having been released ahead of the album it addresses the pressing issue of the deforestation of the Amazon rainforest. Drawing on inspiration in places from the traditional music of the Amazonian tribes, much like Sepultura did back in 1996, but with far greater effect than Sepultura managed on ‘Roots’. Gojira hit the mark melding those traditional sounds and instruments in with their own progressive style and delivering a message that NEEDS to be heard!

As the album progresses, the bands sound becomes more expansive, the more progressive elements in their song writing coming to the fore. Album title track ‘Fortitude’ a seeming step in a totally different direction. Two minutes of softly spoken, hypnotic chanting enveloped by the sound of gentle drums and a tambourine.  This leading perfectly into ‘The Chant’ which kicks off exactly where the previous song left off, but adding additional musical elements. Guitars kick in to up the intensity levels, the chants are amplified, louder than before, then Joe Duplantier and his unique vocals step in to take up the mantle.

What follows is a complete 180° turn into a brutal, death metal inspired number in ‘Sphinx’; still encompassing the bands expansive sound but completely differently to the two tracks before it. This leads us nicely through to the end of the quite simply brilliant album.

Over the years some have questioned the longevity of Gojira and their sound, but ‘Fortitude’ proves that not only does the bands sound and direction work perfectly, but that they are the future of the heavy genre we love so much.