Monarch, a relatively new name in the world of thrash you might think, but actually, they’ve been around in some format or another for over a decade, and actually released an E.P., ‘Dawn to Night’, back in 2011. Things went a bit quite for a while, with the departure of frontman Aaron Chipp-Miller, until Matt Smith (guitars and vocals) joined them in 2014, since then they burst back onto the scene with their first full length, which saw the band re-record all the tracks from the E.P., and add 5 newer tracks, with a much clearer and beefed up production, and with Matt proving to have a more versatile, and palatable, voice than his predecessor, all of which added up to a rather proficient debut, 2017s ‘Go Forth… Slaughter’. 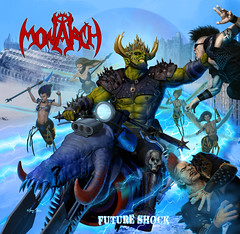 Roll forward four years and we are on the cusp of the release of sophomore album ‘Future Shock’. Starting where ‘Go Forth…’ left off, the album begins with ‘Blast the Seed’, after an bombastic intro the song proper kicks off with a fast riff and a solid band ambiance, every member locking into each other to start the album off to a very strong beginning. Adding more melodies and a load of guitar harmonies ‘Khaos Warrior’ blends more traditional metal into the mix than we’ve previously heard. The title-track though, whilst having a seriously catchy chorus, harks back to the debut, in that it’s on the heavier side of the fence. Also, on the more ferocious side is ‘Nuclear Warfare’, based on a real brute of a riff, it hits you hard and doesn’t let up for the whole of its duration. ‘Shred or Die!’ and the beautifully crafted instrumental ‘Multiverse’, take you up to the mid-point, the later with its gorgeous classical guitars and twisting rhythm section, while the former is one of the catchiest songs, and a good choice for the lead single. ‘Fatal Vector’ is the longest track and throws a real curve ball at its beginning, with a real homage to Slayer in the form of a ‘Criminally Insane’ impersonation, the rest of the track also takes a nod to the now defunct LA legends style; fast, brutal and completely uncompromising. The last three tracks, ‘Collision of Bones’, which was written by, and features, previous bassist; Alex Pickard, the eccentrically titled ‘Swarm of the Whorenet’, which is also the inspiration for the striking cover art, and album finale; ‘Metal Soul’ don’t allow the listener any let up either, right to the end.

I like Monarch, and ‘Future Shock’ is an excellent album, the band are obviously very serious at what they are doing, and yet also have a unique sense of fun, I mean what other band can name the likes of the cartoons Futurama, the Legend of Zelda and Dragon Ball Z, as lyrical influences, and also come up with a character ‘The Whore of the North’ as the protagonist of another song? This hard hitting, yet very melodic, with some great hooks and choruses, the riffs and solos simply fly around your ears. If you’re a fan of the likes of Havok, Warbringer at el, you could do far worse than checking out this exciting foursome. Great stuff.