Search the internet for tributes to the forefathers of heavy metal and you’ll find a fair few albums to choose from. What makes this one slightly different is that ‘L'Uomo Di Ferro’ is an album drawn together by Venom Inc vocalist and bassist Tony ‘Demolition Man’ Dolan and Francesco Conte (Neromega) to raise funds for the Covid workers in Italy. Dolan and Conte have drawn from the Worldwide metal community to produce an album that contains not only the staple Sabbath tracks, ‘Paranoid’, ‘War Pigs’ and ‘Sabbath Bloody Sabbath’ but a couple of songs that aren’t always at the front of the list, and yet in my mind are absolute classics; see ‘Hole in the Sky’ and ‘A National Acrobat’.

The guest list is impressive and extensive. Kicking off with ‘Symptom of the Universe’, we find the band (Dolan – bass, Conte – guitars, Filippo Marcheggiani (Banco del Mutuo Soccorso) - guitars Riccardo Spilli (Balleto Di Bronzo) – drums) ripping into the badass riff that should always increase the heart rate. Each track features guest vocalists, and Rasmus Bom Andersen of Diamond Head sets the bar high. He’s joined by some extra guitar work from Marty Friedman who adds an improvised solo that is worth a listen. 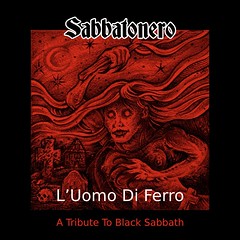 Steve Sylvester of Death SS struggles slightly with ‘Sabbath Bloody Sabbath’, which features Dolan’s bandmate Mantas firing the solo whilst Sylvester’s bandmate Freddy Delirio adds an interesting touch with his keyboard magic, which doesn’t reduce the impact of the song on iota.

Of course, these songs are all incredibly well known to us all and it’s hard to be objective about versions of classic songs. The intention here is to raise money for a good cause and it’s impossible to argue with that. Dolan’s vocals on ‘N.I.B’ will not suit everyone, his rasping, strained style vastly different to that raw Osbourne sound in 1969 but his bass is banging and Suffocation’s Terence Hobbs nails Iommi’s solo.

‘Killing Yourself to Live’, features the dual vocals of Maksymina Kuzianik (ex-Setheist) & Mayara Puertas (Torture Squad) with additional female representation from the Brazilian guitarist Prika Amaral of those death thrashers Nervosa. The changes in tempo are nailed perfectly and the duet gives the song a different feel and dimension. Heaven & Hell is blistering, with a storming solo from Obituary’s Ken Andrew the highlight.

We’ll skip over the butchering that Flegias of Necrodeth gives to ‘Paranoid’, and the energetic but limited delivery of Raven’s John Gallagher on ‘Children of the Grave’ and arrive at penultimate track A National Acrobat which sees Simone Salvatori (Spiritual Front) take the honours with a decent and soulful performance. Unfortunately, the closing duo of ‘Hole in the Sky’ and ‘War Pigs’ are marred by some horrible vocals, and that’s a shame as Wiley Arnett (Sacred Reich) and James Murphy provides some stellar guitar work.

Reviewing an album which is for a good cause and has taken blood, sweat and tears to craft and create is a poisoned chalice. Covering a band as legendary as Sabbath makes it even more of a challenge. There is definitely some good stuff here and the performances are unique. Musically spot on, it’s the vocals that as always, define the song. And occasionally, they just aren’t in the right place.

Order you copy of the album here!