May 2020 saw the release of ‘Dark Revolutions’, the latest album from NWOBHM stalwarts Tokyo Blade. It was an excellent record, one that I enjoyed immensely. My review of the album stated ‘it’s fast enough to appeal to those who like it with pace, ample melody and a solid, powerful feel that doesn’t fade at any time. This is an album that is going the distance’.

It was way back in 1984 that Tokyo Blade’s star was very much in the ascendency. ‘Night of the Blade’ was the band’s second release, following 1983’s eponymous debut album. The band had changed vocalists, with Alan Marsh being replaced by Vicki James Wright. It was this album that suggested that the Blade were likely to push on and follow the likes of Maiden, Saxon, and Leppard into the big time but alas, it wasn’t to be. 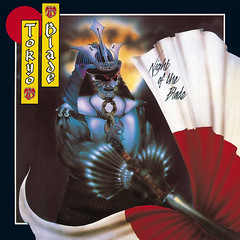 Wright was forced to record the vocals in a short space of time, as Marsh had already recorded them before departing. So, it’s a credit to Wright and a testimony to Tokyo Blade that the album sounds as good today as it did then. With founder and ever-present Andy Boulton on guitar, John Wiggins (guitar), Andy Wrighton (bass) and Steve Pierce (drums) made up the line-up for this classic slice of 1980s UK metal.

Released once more on vinyl, ‘Night of the Blade’ is a solid album, with songs that stand the test of time today. Sure, there is an 80s feel about them, with the NWOBHM formula applied in spades but if you can transport yourself back to 1984, soak up the cut off denim drenched in patchouli and weathered patches, and the sheer excitement of the movement, ‘Night of the Blade’ should bring back some rather pleasant memories.

The title track is iconic. The Iron Maiden feel is undeniable, with the dual guitars and melody echoing the early Maiden work of Iron Maiden and Killers but there is much more here. It’s an absolute banger of a track, with some fiery guitar solos and Wright’s high-pitched vocals hitting the spot. It’s almost worth buying the album just for this song.

But in case you need to be convinced, then there is plenty more to entice you.’ Warrior of the Rising Sun’ brings a lovely chug so reminiscent of the time before breaking down into a semi-ballad, the gentle pace building into a much harder edged track. It’s music to bang your head to. The Judas Priest style riffing on ‘Unleash the Beast’ signals yet another classic; it’s heads down and stretch that neck all the way.

The musicianship on ‘Night of the Blade’ is tight, focused and on point. The fact that Tokyo Blade didn’t get more attention remains a travesty but a sign of the times in the mid-80s. It’s heartening that the band are still delivering the goods in 2021, albeit on a less intensive scale. ‘Night of the Blade’ is an album of historical importance and one that should be treated with respect. If you don’t know about this great UK band, now is the chance. Get stuck in and pay your respects.