Somber guitar notes guide us slowly into this re-release from Clouds. Now signed to Personal Records, Clouds are about to re-issue a large proportion of their back catalogue as the original recordings were self released titles and therefore exist in limited quantities.

The grave guitar is joined by similar clean and melancholy vocals, combining soon with muted drumming. This is doom of the funeral type. The music speaks of grief and sadness then the addition of a well performed death growl darkens the mix a little more. This ten minute opener never lets up in its sorrowful vibe throughout its length. A spoken word section sprinkles a little variation to the mix, but it’s the growl that shines, and captivates. 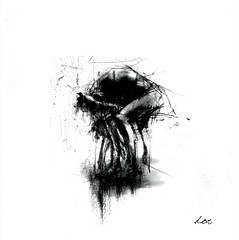 The second track 'Last Days of the Sun', thankfully, carries on in a similar vein. Hints of the music of Swallow the Sun are deep in this music, it is bleak and glorious. Once again a clever mix of the death growl and clean vocal style sit on top of the slow dramatic doom music.

In addition to the mix of vocal styles, the inclusion of piano in several places seems to add a little class and air of contemplation to proceedings, although the metal crunch of a doom riff is never too far away. The title track is an excellent example of this skill, with strings now combining in the brew, Clouds show more and more capability in this genre.

With all tracks around the eight to ten minute mark (apart from the bonus track) there is plenty to get your doom laden teeth into on 'Dor'. The music that they create is an enticing one. This could be an interesting era for both Personal Records and Clouds, as Personal Records intend to release four of Clouds first time releases; they are also working with the band on an exclusive fifth release in the future.

There is some sad bleak excitement to be taken from that news.