The ninth album from the Norwegian black metallers sees the band who evolved in 2004 produce a concept release that sits alongside an entire movie. Part biopic and part fictional, Wild North West sees the band take the listener deep into the mountains, to a place where death is never further than a step behind. 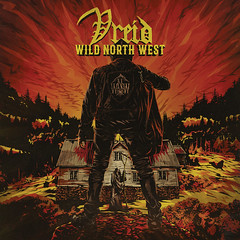 Vreid grasp black metal and throw it together with rock n roll to deliver that ferocious black n roll hybrid which penetrates deep. It is explosive, ferocious and with one eye at all times on the band’s Norwegian heritage. Thus, as well as thunderous passages of frenetic tremolo riffing, we also experience slower, dramatic and moody sections which plunge you into the darker, inner most thoughts of the story.

For a band now well ensconced in their art, there is no shortage of creativity and fresh ideas on ‘Wild North West’. The heavy riffs that open ‘The Morning Red’ stray deep into routine metal with a demonic edge, the song drifting into doom territory before clawing its way back to more expected black metal quarters. It is anthemic, majestic and works on every level. The blistering ‘Spikes of God’ continues the ferocity, with the rampaging bass lines and rolling guitar work railing about the frenetic blast beats which batter relentlessly. On top of this, there is the perfectly placed croaking black metal vocals of singer Sture Dingsøyr.

With the weighty ‘Shadowlands’, with its rich organ intro throwing another curved ball into the pot, closing this mightily impressive record, the band that crafted sognametal have once more perfected a delicious blend of rasping black metal with anthemic classic rock and metal. The soundscapes are gloriously cinematic, the content ranging from raging thrashing passages through to more melodious melancholy. Certainly, an album that is worth exploring in some depth.