Album Review: Mental Cruelty - A Hill To Die Upon
Reviewed by Paul Hutchings

A blend of haunting melancholic, crushing blast beats and demonic roars from the bowels of hell greet the listener within the first few minutes of this visceral and explosive album. The punishing opening song ‘Ultima Hypocrita’ probably needs little translation, but the underlying aggression is unmistakable, albeit balanced with some dynamic, blistering guitar work thanks to guest guitarist Yo Onityan, the Japanese virtuoso and previous member of Rings of Saturn. 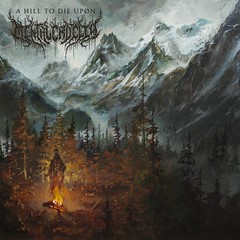 The album ebbs and flows, gentle, calming passages savagely capsized by fierce eruptions that come from nowhere. The use of orchestral effects builds the tension further, the sweeping soundscapes juxtaposed with shimmering extremes, a cacophony of molten hot black metal that grips with a vice-like grip.

‘A Hill To Die Upon’ is the band’s third album, and their signature black metal breakdowns and howling vocals leave no hiding place. This is extreme brutality with the faintest hint of slam lingering in the shadows.

At times, the sheer intensity of this technical aural assault becomes a challenge to listen to, but the sheer force of the music drags you along, whether you want to or not. Those bloodied claw marks on the concrete are indeed where my fingers turned to stumps.

Tracks like ‘King ov Fire’ and ‘Eternal Eclipse’ take no prisoners, the battery of severe drumming, swirling vortex of insane riffing and the guttural vocal delivery all combines into a maelstrom of carnage and chaos. For a band with an average age of 23, this is blistering stuff. It may not be my cup of tea, but if you fancy some face-melting technical death metal combined with blackened orchestral influences, Mental Cruelty might just be the order of the day.