I fervently hope that Southern Lord have pre-warned space agencies around the globe of the imminent release of the new Nadja album. For Luminous Rot is so heavy that the disruption to the gravitational field is such that its arrival could well be mistaken for an extinction-level-event asteroid or the mythic Planet X.

The Canadian duo have well over three-dozen releases under their belt since 2003 in the form of full-length albums and EPs, along with a host of collaborations with the likes of Atavist, Black Boned Angel and A Storm of Light to name but three. 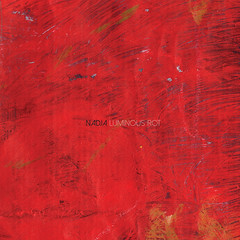 For Luminous Rot, Nadja have moved to explore shorter and more tightly structured songs which have allowed the band to experiment with additional post-punk, shoegaze and industrial elements. Dark Inclusions utilises the industrial and mixes it with the post-punk vocals in the most obvious example of the exercise. Elsewhere, the title track itself climaxes with the pounding of machines, but only after unpacking a chucky, repetitive riff that grows more dreamlike with each passing.

If you are a long-time listener to the works of Aidan Baker and Leah Buckareff then don’t be put off by thinking that they’ve gone all commercial with Luminous Rot, as the familiar Nadja tropes are still on show. From ambient doom, drone, ethereal-sludge and blackgaze, the band have simply augmented their sound. The droning hum and sustained feedback of the album’s introduction should soothe any fears that Nadja had sold-out.

An album this heavy needs a weighty subject matter and thematically Nadja consider ideas of alien intelligence and first contact as inspired by writers such as Stanislaw (Solaris) Lem and Lui Cixin, whose The Three-Body Problem trilogy led the band to consider multi-dimensionality and spatial geometry. You know, the usual subjects beyond Satan, Sex and Serial Killers.

Fruiting Bodies plays out a little like Electric Wizard, with a fuzzed-up riff and a slow, yet immersive, plod that hides otherworldly vocals amid crushing slabs of doom and hypnotises as it goes. Starres takes a similar approach but uses a gothic, post-punk opening and the blackest of metals from which a hidden melody seeks to be freed.

Central to Luminous Rot, and a triumph of Nadja’s understanding of their craft, is Cuts on Your Hands. At thirteen minutes-plus it should be something of an endurance test and in lesser hands it would be. But Nadja build an perpetually engrossing piece around a simple, repetitive riff that is ridiculously addictive. Every passing and return of the repeat draws you further and further into its awesome sense of both immense scale and quantum-level operation.

The angular sounds are some of the heaviest you’ll hear, yet the duo have the confidence to include soaring guitar threads that bounce off the main progression as though off a planet’s outer atmosphere.

Nadja are a band who have been dedicated to their craft for the better part of two decades and have made some of the heaviest and most challenging music out there. Mixing their usual sound with a shorter and tighter song structure might allow the band to reach a wider audience. Luminous Rot is certainly worthy of the widest of acclaim.