When the call came through from The Razor’s Edge HQ – from the Editor-in-Chief, no less – asking whether I’d be interested in covering this most momentous of occasions, I played it cool. “I think I could fit it in.” Said I, adopting a cucumber-kinda-groove.

When, in reality, any chance to see the greatest Black Metal band of all time - and featuring guest slots from previous members – would be enough to have me salivating at the mere prospect. Add that to the sixteen-month (forced) hiatus since the last I saw musicians practising their craft and I was fully committed at “Emp… “

A darkened stage, bedecked with the imperial E banners, is flooded with blue light as Ihsahn, Samoth and Trym launch into In a Wordless Chamber from 2001’s Prometheus: The Discipline of Fire & Demise. The only track played from the last album is rendered note-perfect and demonstrates Emperor’s ability to seamlessly join the aggressive with the classical.

At Chamber’s… conclusion it was a joy to hear the small attendant crowd voicing their appreciation, reminding us that, fingers-crossed, normality is only a matter of weeks away. The huge symphonic swathes of Thus Spake the Nightspirit began the evening’s domination by 1997’s Anthems to the Welkin at Dusk. The stabbing keys and frenetic guitar of The Loss of Curse and Reverence not only show Emperor’s faster side, but also their near-psychic connection as musicians.

Blue light gives way to green which feels in perfect harmony with the 50s sci-fi elements heard in The Acclamation of Bonds and the windswept essence of With Strength I Burn.

As the latter track fades the stage is cast once again to darkness, with only Ave Satani proclaiming over the PA. The band return in a flash of red light, this time with a masked Mortiis taking bass duties from Secthdamon and occupying his place stage-left; whereas, behind the kit, Trym has given way to Faust.

Ihsahn’s voice loses its refinement and adopts a far more guttural tone for the cover of Bathory’s Call from the Grave and Emperor’s own Wrath of the Tyrant. Mortiis is present for just these two songs, but seeing this incarnation of the band reunited, however briefly, was a genuine joy to behold. Faust also departs but will return again shortly.

Only Curse You All Men is aired from IX Equilibrium before the band begin the In the Nightside Eclipse suite with The Majesty of the Night Sky. The internet broadcast is supplemented by graphics of a lonely forest, dark and deep, and the silhouettes of the trees create shadows more eerie than any potentially haunted house.

Faust rejoins the band for I Am the Black Wizards and the inevitable Anno A Satana and, like that, it’s over far too soon. A single encore of Ye Entracemperium and Emperor depart for good leaving us all wanting, nay craving, more.

This thirtieth anniversary show promised much and delivered on every aspect. The band were as tight and locked in as you would expect, yet the aggression and malevolence of each song was performed in crystal clear sound. In lining up their history in such a way Emperor’s evolution from a frost-bitten Black Metal horde to sophisticated exponents of the Dark Arts is evident.

Now, all we need is a new album. Hint-hint 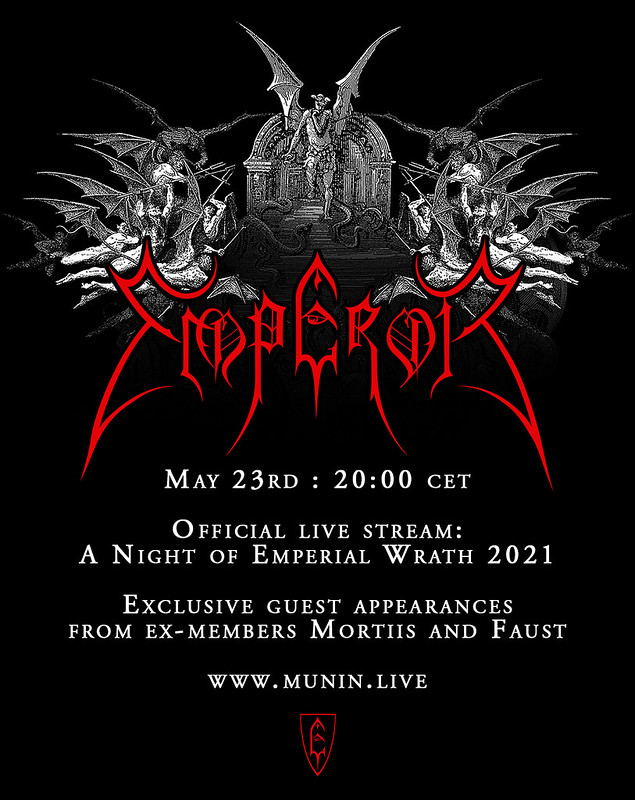 In a Wordless Chamber
Thus Spake the Nightspirit
The Loss of Curse and Reverence
The Acclamation of Bonds
With Strength I Burn
Call from the Grave (Bathory cover) Mortiis & Faust
Wrath of the Tyrant [Mortiis & Faust]
Curse You, All Men!
The Majesty of the Nightsky
I Am the Black Wizards [Faust]
Inno A Satana [Faust]
Encore: Ye Entracemperium