Blackened thrash or blackened speed metal (whatever you want to call it) is very much on a resurgence as of late with a movement of younger bands unleashing old school hellish sounds on the heavy metal world but it’s time for these young ‘uns to learn a lesson or two from one of the proper old school and prolific blackened thrash bands. After an absence of five years it is time for Churches Without Saints which is album number nine from German blackened fiends Desaster. 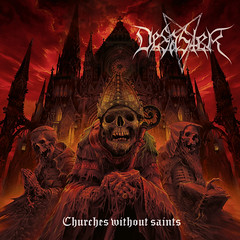 Churches Without Saints is the first album for new drummer Hont who joined the band back in 2018 and he fits in perfectly with the bands sound. Desaster don’t reinvent the wheel anywhere here but as a band that has been in existence since 1988, they just unleash 11 songs of Desaster doing what they do best. The music on Churches Without Saints does have various shades from high energy blackened thrashers such as Learn To Love The Void, Falling Trinity and the wonderfully old school sounding Hellputa but there are also songs that dabble in a more atmospheric and melodic sound such as Exile Is Imminent, the title track and Endless Awakening. These changes of sound and tempo means the album is ever shifting and remains wholly engrossing and entertaining throughout its 46 minute duration. Aside from new drummer Hont, Desaster veterans Infernal (guitars) and Odin (bass) put in ferocious performances with rhythmic barrages of riffs and some tasty lead guitar work from Infernal. Long standing vocalist Sataniac provides a rough and ready vocal performance which whilst not refined is perfectly suited to the chaotic nature of the music.

Desaster don’t rush out albums and the few years break between releases always means that it’s a quality release when Desaster do give us a new offering. There is plenty here for any self respecting extreme metal fan whether you lean towards the more melodic side of things or whether you want some hellraising old school thrashing. Churches Without Saints is another top quality album from Desaster and another in a long line of excellent albums.