Album Review: Go Ahead And Die - Go Ahead and Die
Reviewed by Richard Oliver

Go Ahead And Die is the self titled debut album from the new father and son project of Max Cavalera and Igor Amadeus Cavalera. This album is probably the gnarliest, ugliest and most brutal material Max has put his name to since the very early Sepultura albums and should definitely please fans of his early work though the mastermind behind this project is very much Igor Amadeus Cavalera who wrote the majority of the material during the lockdown. The band is a trio with Max on vocals and his trademark four string guitar, Igor on vocals, bass and lead guitar and Khemmis drummer Zach Coleman completing the line up on drums. 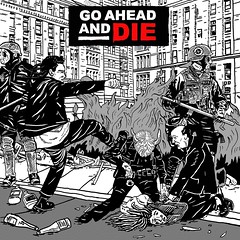 One easy way to describe the music on Go Ahead And Die is pissed off. It is ugly, brutish and gnarly with influences ranging from early thrash and death metal, crust punk and grindcore. It’s a blender which splatters up Celtic Frost, Possessed, Napalm Death, Anti Cimex, Discharge and early Sepultura among others. It is very simple and straightforward viciousness with caveman levels of simplistic brutality but a lot of that is what adds to the charm. The sledgehammer to the skull subtlety of songs such as Toxic Freedom, I.C.E. Cage and Prophets Pray should have old school extreme metallers cackling with glee as this album very much harks back to the extreme music of yesteryear. The dual vocals of Max and Igor are effective with Igor adding a crust punk edge whilst Max sounds more caustic and pissed off than he has sounded for years. The production is as rough as a Guinness drinker's arse in the morning but this is perfectly in keeping with the sound and ethic of this album and the rough and ready sound truly compliments the music.

Go Ahead And Die is a simple but effective album which is also tremendous fun. It does throw all the best songs into the first half of the album meaning that with a near 45 minute duration it does start to drag and feel a bit too repetitive towards the end. All in all whilst not perfect this is a fun piece of extreme metal filth and it’s great to hear Max staying away from his now trademark groove sound and doing something more akin to his musical roots.

ICYMI - Check out our interview with here.