It's always great to hear new material from Teutonic legends Destruction, one of the old guard and one of the hardest working and most consistent bands currently on the circuit, certainly since Schimier's return which would you believe is now 23 years ago! However, this is a historic release for the band, as it's the first not to feature the now retired founding member Mike Sifringer, the original inventor of evil who was the only member up to this point to feature on every album, E.P. and live release. His unique style and riff execution has always been a standout aspect of the band’s sound. So how do the band fare without such a key figure? Well, new six-stringers Damir Eskić (who guested on 'Under Attack' before becoming a full-time member on last album 'Born to Perish) and the debuting Martin Furia do a superb job of handling the guitars, both at emulating Mike's riffing and also adding some fresh new dynamics as well.

The album starts off with intro ‘Under the Spell’ an atmospheric piece with clean guitars and militaristic percussion, before launching headlong into the ferocious title-track, a searing up-tempo thrasher with scorching riffs, a captivating chorus and Schimier’s unmistakable shriek, not to mention a soaring Damir solo. ‘No Faith in Humanity’, which lyrically pre-empts current world events and the existing spiritual genocide, and musically, if anything, increases the speed up a notch, with more relentless riffing and escalating leads. This is already a hugely impressive start and the slower, crushing ‘Repent Your Sins’ continues the bombardment of anvil heavy riffs and unyielding drums from the returning Randy Black, who adds both solidity and adroit skill to the band’s rhythm section, ensuring all hell breaks loose. 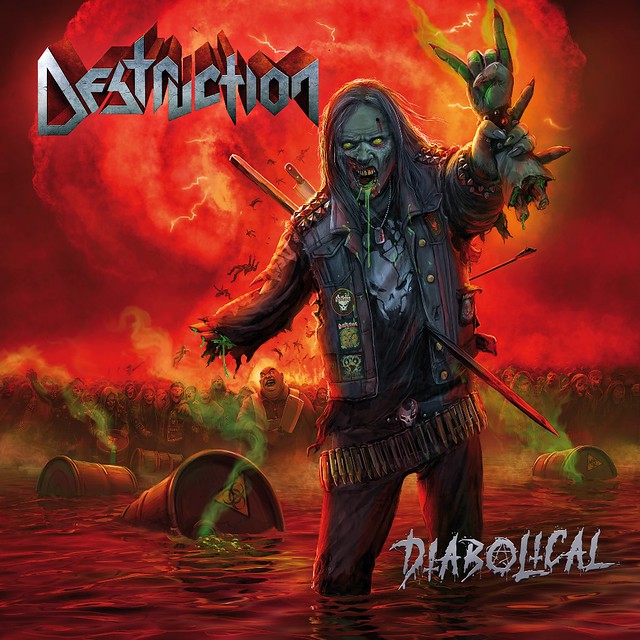 Working again with V. O. Pulver in the engineering chair, the band keep to their tried and trusted 21st century sound, which is crisp and clear in all aspects, with crunching guitars and pounding drums, with the bass inexplicably both audible yet inaudible at the same time, which is a shame as there are some nice bass lines going on if you can pick them out from the dense mix. This modern, pro-tooled sort of production is undeniably robust and undoubtedly heavy, but it is also a bit flavourless, in that it blends in with the majority of recent extreme metal albums, although to be fair, Destruction helped pioneer the sound, so I guess why fix it if it isn’t broken? Also returning is the wonderful Gyula Havancsák on the artwork, who has been used consistently since 2005's 'Inventor of Evil', and this latest piece continues that quality with a stunningly vivid picture of a thrash invasion by a zombified metal crowd, including the Mad Butcher himself, wading through a chemical lake!

Back to the songs, ‘Hope Dies Fast’ and ‘The Last of a Dying Breed’ are both growers, the band settling into a groove after the punishing opening thrash anthems, keeping the listener under attack, while the middle album double punch of ‘State of Apathy’ and 'Tormented Souls' are among the albums strongest, the first of which has to be one of the bands fastest tracks ever, continuing the eternal devastation, while the later dials back the speed but ups the pulverising heaviness by adding a little bit of left field groove, for a slightly different sounding side of the band and keeps up the infernal overkill. 'Servant of the Beast' starts with a panicky urgency to it, that adds an edgy freshness while 'The Lonely Wolf' is more mid-tempo with some nice guitar melodies, and although a solid enough song, is one of the less remarkable ones on show. 'Ghost from the Past' reminds me of the 'Metal Decay' album with its stripped back approach and straight to the point riffs, then 'Whoreification' ends the album of original material, and has to be one of the best tracks, a sinister intro melody segues into a pounding stop/start grind, and an ear crushing chorus, guaranteed to get that neck snapping. Finishing off, and I'm not usually a fan of cover versions but they certainly make 'City Baby Attacked by Rats' originally by G.B.H. their own with a blistering run through and ending the album on a fantastic energetic finale.

Overall, this is a very strong Destruction release and continues the excellence of ‘Born to Perish’, and the quality of the tracks seems to run a bit ‘deeper’ than a few of the other 2000s albums, although saying that it still doesn’t top ‘The Antichrist’, that is a special album which they just haven’t been able to top, but this is certainly among the closest to it. If you’re a modern Destruction fan, then you’ll be pleased to hear that the loss of Mike is not the sentence of death it could have been, and this new revitalised line-up promises to see that the bestial invasion will continue for some time to come.