Mammoth WVH may not be a name that familiar with many right now, but don’t worry that is all about to change. There are clues to the history on which the band are built in its name. For those in the know, they will be obvious, but maybe for others less so. Look at those initials, there’s a clue right there, and "Mammoth" has significance else where.

Mammoth WVH is the solo band from Wolfgang Van Halen, son of Eddie Van Halen, who replaced Michael Anthony in Van Halen as bassist back in 2006. The more cryptic element of the bands name ‘Mammoth’ is a nod to Wolfgang’s father and an easter egg for those hardcore Van Halen fans. Mammoth was of course the name of Van Halen (the band) back in the early 70’s. 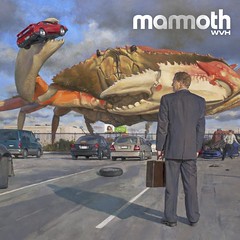 So with the history built upon, where does Wolfgang take this project?

The debut is build on his family legacy, but Wolfgang gives it his own stamp and takes his music in very much his own direction. Opening with a huge catchy riff on ‘Mr Ed’ the stall is set, ‘Horribly Right’ has its own catchy riff and the listener can soon see this album is built upon them, no bad thing!

‘Epiphany’ takes a different tone, more direct, a little darker, yet built upon another catchy riff. ‘Don’t Back Down’ will be familiar to the all you Planet Rock listeners as it’s been on heavy rotation of late, up beat, bouncy and a full on rock assault.

Wolfgang performs every instrument himself on this album, and the work highlights his talents. So often second generation musicians are trolled on the internet for riding on the success of their parents. On ‘Mammoth’ Wolfgang proves to any doubter out there he is here for the long haul and he has the talent to drive a career in his own right.

The album is closed by bonus track ‘Distance’ released as a single long before the album and a heartfelt tribute to the loss of his father.

As we [hopefully] near the end of eighteen months of depression and sorrow, Wolfgang Van Halen lightens the mood with an upbeat, rocking album full of catchy tunes and fist-pumping anthems. An album that has something for everyone.