Few bands are as at home on Kscope as French outfit Klone. The band’s first electric live album is both a classy introduction to the band for new fans and a permanent record of their atmospheric quality, described by the band as “a way to pay tribute to our audience and the people who support us.”

Formed over two decades ago in Poitiers, Klone started life as Sowat, before changing name to Klone in 1999. The band have slowly crafted a reputation for musical genius, alongside stunning live shows. I’ve been fortunate to have seen the band several times, and even in those earlier years their progressive nature and expansive soundscapes ensured they stood out. 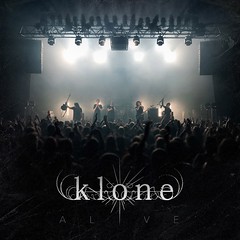 Their discography dates to 2004’s debut full length, ‘Duplicate’, with their most recent release the 2019 Kscope debut ‘Le Grand Voyage’. ‘Alive’ is a merger of two shows, spanning a three-year period. The first, at Sjiwa in Baarlo, The Netherlands in October 2016 and the other at Moloco in Audincourt, France in November 2019.It’s hard to hear the join.

For those unfamiliar with Klone’s music, the best way to describe it would be through sweeping soundscapes, that are epically mood driven. Dark guitar tones, haunting vocals and brooding passages echo and resonate. Ethereal pieces cross with heavier, riff driven segments that combine in a rich, delicious tapestry of progressiveness.

From the opening song on this release, the soaring ‘Yonder’, through to the triumphant conclusion of ‘Army of Me’, this is a live album that simply washes over you. It’s compelling, at times invigorating and uplifting, with the blend of majestic songs sweeping the listener in a tide of emotions.

There is little chatter between songs, the Frenchmen preferring to let the music do the talking. Unlike some bands, Klone’s music doesn’t outstay its welcome. Rarely do the songs exceed six-minutes, with the majority averaging around five. The musicianship is superb, with the dual and dark guitars of Guillaume Bernard and Aldrick Guadagnino shimmering, the tingling solos and gentle touches contrasting with heavy riffing, such as on ‘The Last Experience’, a highlight amongst many highlights in this 14 song compilation. Yann Ligner’s clean vocals have enough of an edge to give the songs grit and heart at the same time.

With engineering by the band’s live sound engineer Chris Edrich and Mastered by Pierrick Noel, ‘Alive’ is a special recording. If you aren’t familiar with Klone, but enjoy The Pineapple Thief, Steven Wilson, Riverside, Opeth and Katatonia, then you would be advised to seek out a copy of this album. You won’t regret it.