Possibly not the first band you think of when taking a nostalgia trip back to the eighties, but there is lots to love about Neon Christ’s re-released debut. Originally put out in the summer of 1984, the first 10 tracks – and the first side of the 7” E.P. – comprises the songs from the March ’84 session.

Taking up less than eleven minutes of your time the songs are short sharp stabs of eighties-era excess. Parental Supression, Winding and Bad Influence are all imbued with the crossover ferocity of early D.R.I. We Mean Business drops in with a bass-line and a cranky-sounding guitar, leading us to a netherworld where crossover and punk meet.

The Draft Song, It’s Mine and Doom are built around the pummelling punk of Black Flag and Descendants, with the song Neon Christ arriving in a far less chaotic manner, though leaving in a no less abrasive fashion. 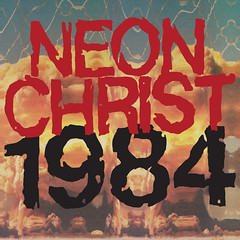 Of the tracks from the debut E.P., only After, the first song to break the two-minute barrier, shows any sign of passivity. The vocals are delivered in a spoken word style as the distorted guitar seems devoid of the previously established aggression. Listening to After, you get the sensation of an acceptance of sorts and there’s something rather compelling about it.

The second part of the release – and the second side of the 7” E.P. - is made up of four tracks recorded on Labor Day ‘84 and demonstrates how the band’s experiences of sharing stages with the likes of Dead Kennedys and Circle Jerks had refined their sound. Both Blind Patriot and The Death They’ll Give You are of the old-school hardcore punk and show the influence of the then-fledgling Thrash scene. Ashes to Ashes, though added later, retains the thrashing influence, despite breaking down in a melodically gothic way.

The longest song on offer here is The Knife that Cuts So Deep and features far more structured attention to detail. Its fuller sound is the meatiest heard on 1984 and this regard of the building blocks of punk sees a song that moves itself through a journey of sound.

At the time of recording these songs, Neon Christ was a four-piece, whose members would go on to populate bands like Bl’ast, Gardens of… and No Walls. Guitarist William DuVall would form Comes With the Fall in Los Angeles, where he would meet Jerry Cantrell and, eventually, join Alice in Chains.

The band have always remained close, with DuVall being instrumental in the collating of the material on 1984 and, following a reunion in 2008, long-time fan Greg Anderson of Southern Lord started the ball rolling on the reissue.

Neon Christ might not have set the world on fire back in the day, but this release is twenty-minutes of chip-on-the-shoulder punk attitude and early thrashtastic stomps. You know you want too!