For those of us around in the halcyon days of the New Wave of British Heavy Metal, the debut album by Witchfynde, ‘Give ‘Em Hell’ was one of the more sought after records to add to the collection. Although they actually started a good five years or so before the NWOBHM movement gained momentum, it was their semi-occult image (born out of Sabbath and Black Widow) and the confusion with Witchfinder General that attracted many. 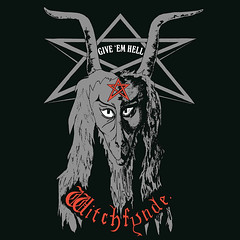 In a throwback to 1980, High Roller Records have remastered the album, which was originally released on the Rondelet Record label. Listening to it in all its glory now, it’s hard to understand what all the fuss was about. Vocalist Steve Bridges had the typical heavy metal delivery of the time, whilst many of the tracks are rather insipid, overlong affairs, which suggested that the band had been listening to too much Rush and Floyd at the time. ‘Leaving Nadir’ has one foot stuck in ‘Caress of Steel’, whilst the grandiose ‘The Divine Victim’ bizarrely refers to Joan of Arc. ‘Unto the Ages of the Ages’ clocks in at nearly nine minutes in length, something that was almost unheard of back then, and it’s a bit of a slog. With bits of late 70s Sabbath thrown in for good measure.

Witchfynde’s strength certainly wasn’t in the long, drawn out epic but some of their shorter numbers were just as painful. ‘Getting’ Heavy’ ranks as one of the worst songs I’ve ever heard. But there are diamonds tucked away and the best follows the worst with the title track, a classic of the NWOBHM period and a track that still holds its own today. ‘Give ‘Em Hell’ is probably the song that Witchfynde are best known for even 40 years later, and they were quite unable to match it. Listening to it today, it’s a basic, routine song but somehow it holds a little place amongst the dross that flooded the UK metal scene at the time.

Overall, ‘Give ‘Em Hell’ is a curious beast. Variable in quality throughout, it has for some reason become a bit of a classic. If you are curious, then maybe spending a hour with this rather weird and wonderful record can satisfy that itch.