You probably think I’m a bit behind on my deadlines as, surely, Despise You released West Side Horizons back in 1999. And you’d be right – about the release date, not about the deadlines (rumour has it that over at Razor’s Edge Plaza, the Editor-in-Chief has a special torture implement for scribes who miss their deadlines) – and I’d like to think I was too mature to comment about being called Shirley.

This new release of West Side Horizons sees the Inglewood, CA Powerviolence pioneers’ sixty-two track compilation now available on compact disc and a myriad of vinyl versions. Fortunately, the temptation to tinker with the raw sound of the band has been resisted and what you get is forty-five minutes of visceral, yet brutally honest aggression.

Compiling available and previous unreleased music, alongside split 7” projects with Stapled Shut, Crom and Supression, West Side Horizons is an overdue opportunity to revisit one of the original Powerviolence acts and not only enjoy their music afresh but to consider Despise You’s wider influence on the Extreme music scene in the years since. 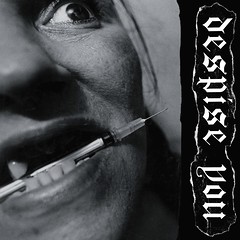 With sixty-two tracks on offer it would be easy for each to blur into a single morass of blitzkrieg drumming, fuzzed up bass and grinding guitars. But Despise You’s music is such that, while the bulk of West Side Horizons is composed of a barrage of sound, the band incorporate some fat grooves and are prone to unveil the occasional heavy sludge.

Neither does to the band shy-away from a beatdown or two. Among the frenzy of Lagrimas, or the absolute carnage that is Unmoved – Complacent and Been Lead, can be heard some immense breakdowns.

Similarly, amid the devastation of It’s All in God’s Hands Now, Shit Trait and Loathe, you’ll find the groove-infused One More Rosary, No More… Feelings and Tired of Trying, the effect of which is to turn the heavier, fist-in-your-face moments, even more weighty. Yet, that’s not to say the heavier tracks on West Side Horizons aren’t devoid of memorable hooks: you’ll discover Pa Que Te Sirve? has its own head-bobbing sections and the opening moments of Swing and Cease certainly gives pause to wonder in which direction the track is headed.

Despise You’s sound is built on the merging of death metal and hardcore punk and those punk elements can be heard on the likes of You Make a Good Follower and Career Overview, in which the absolute aggression heard elsewhere is tempered slightly.

There’s a meaty, metallic chug on Guilty View, one of West Side Horizon’s more accessible songs which, alongside Pig Mindset, Puppet and If We Could Switch demonstrate Despise You’s more tuneful and (relatively speaking) mellow side.

Also of note are the band’s reinterpretations of Possessed’s Burning in Hell, D.R.I.’s Couch Slouch, In Your Eyes from Circle Jerks and Beowulf’s Taste the Steel; all of which are given the Despise You treatment.

West Side Horizons is a collection that stands up as well today as it did more than twenty years ago. It’s a document to a different time in music, when raw production enhanced the feeling and appreciate of the tunes and it was the music that mattered.