I’ve known of Imperialist for a few months now, particularly ever since this album was announced. I’ve known they perform a sci-fi take on black metal which I am all for yet I hadn’t listened to them yet, not even their debut record Cipher; with Zenith however I intended to correct that. Formed in 2013 out of California, United States the band got their first taste of exposure through their debut 2015 EP Quantum Annexation which straight away demonstrated to prospective fans their love of science fiction as well as hinting what may come in the future. As mentioned prior, the band dropped their first full length record Cipher in 2018 to decent fanfare, a great start for them but now three years down the line the band return with their sophomore record: Zenith. So this is my first experience with Imperialist and I must say, I was excited.

For an album that you know is going to throw some visceral sounding music your way, it certainly starts up pretty serenely. It’s more than likely an atmospheric piece to not only settle you in, but to act as a musical juxtaposition for the ensuing carnage that’ll be coming your way in a few moments. While the general sound of Imperialist is black metal I will say that I’m surprised as to how much control the band exert on their sound. This isn’t a blackened sound that is allowed to run free and without restraint, I’ve heard plenty of bands who have allowed that very thing. Imperialist enable that dark and encroaching evil to make itself known but I like how the band clearly hold the reins at all times. What’s more is that the band aren’t going to town on speed either, for track runtimes that can reach as high as 6 - 8 minutes each it’s curious how the band possess enough self-discipline to not just turn them into marathons of speed.

The riffs here carry this icy and sharp aesthetic as the band play for you. The production on the whole enables the band’s performance to hit you with much more impact, that’s not to say the record has a huge amount of Bass within its mix or has an especially powerful soundscape because ultimately Zenith is a rather humble sounding album in that respect. The guitar work within possesses a straight to the point, laser focused aspect to their strike whereby the residual sound the riffs create isn’t one that slams you into a wall nor do they wrap around you; here the riffs fall like needles with their syringes gleaning and ready to penetrate. It’s that stabbing and piercing sensation which these riffs possess that make them so keen. But at the same time they’re not so sharp that you’ll cut yourself on them by mistake, you’re fully able to experience the blackened soundscape without it feeling like they could overwhelm you. In this light, I could recommend Zenith to people who may want a decent taste of black metal but don’t want something too extreme. 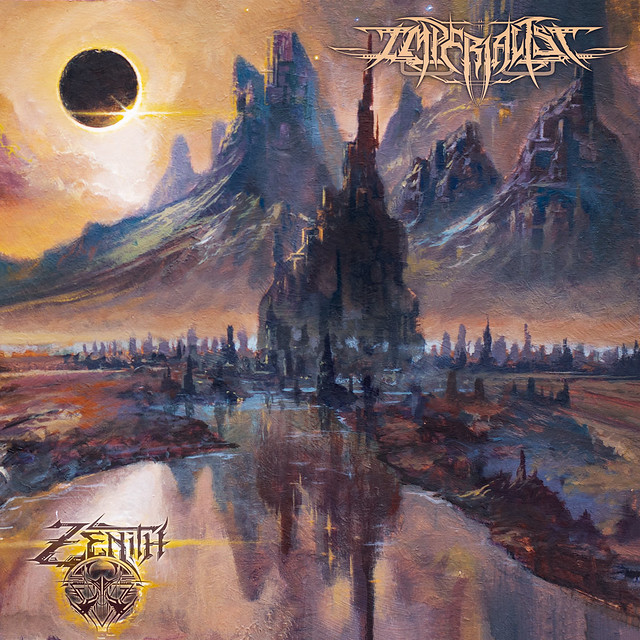 More often than not, you’ll come across drums that just rule the overall landscape of the album and especially if it’s a black metal piece. It’s interesting therefore that the drums throughout this album do not try and rule your experience of Zenith, they keep themselves to themselves and just do what you expect them to do, only it’s from a distance and the way they have been produced means the varying blast beats throughout don’t try and kill your ears. Instead the drums encase themselves around your ears helping to bind together the rest of the band’s performance wherefore the riffs and vocals are able to bounce off them and return back to the solid ground if you will. “Parallax Descends” is a prime example of this where you’ll acknowledge drums are delivering a notable intensity and yet your senses don’t feel like they could be straining under their ferocity. This is reinforced by how the drums can also dial back on their strength and give us a more rudimentary pattern and speed when the band’s general tempo slows as well.

Sometimes when a black metal band choose to stretch out their tracks in the way Imperialist do here they can come off as bloated, overly indulgent pieces that can fall victim to repetition or needless songwriting elements that add nothing to the grander track in question. Imperialist of course elongate their music in pieces however I think the reason they don’t fall prey to easy pitfalls in this case is that they don’t play hyper fast. There’s a sense of urgency and speed to their playing that much is guaranteed yet it never feels like it’s driving down on you. The band’s choice to keep things moving at a steady pace ensures that songwriting is actually given not just the time but also the breathing room to become more realised than if the band had just decided to utilise speed to its zenith (pun unintended). With the longer pieces on this record the songwriting could have easily become a bore with our attention waning and engagement becoming a crawl only to get us through to the next track, I can confidently say that doesn’t occur here since the band take their time to flesh out their songwriting enough and in the places where it matters.

In conclusion, Imperialist’s Zenith is a solid black metal album that I can really get on board with. Black metal may not be my immediate forte but when it’s done well I can have a real affinity for it, particularly when it’s based around a sci-fi element too. I appreciated the band here for their self-control and not simply injecting a ludicrous amount of speed simply for the sake of it, it really enables their songwriting to feel much more fleshed out particularly for the longer tracks. This is sci-fi black metal that doesn’t go too hard on your senses and actually lets you breathe. The production and mixing is well balanced and allows you to feel these riffs strike you without feeling like you’re sustaining any kind of harm from them. Blast beats are impactful but do not dominate the soundscape of the record, the band knew exactly what they were doing here when they were working out what should go where and to what degree during the mixing process. All in all I enjoyed this and I’m glad I checked it out.