Remember the time when each weekend contained at least one gig? Well, bizarrely enough, it happened again. Five days after Steelhouse festival closed its doors on 2021, a road trip to Cornwall beckoned and a day in a recycling centre called The Yard. Hang on I hear you ask, what has recycling got to do with music? Well, The Yard is more than just a carbon footprint crusher, it’s also a fabulous outdoor music venue, linked with Cornish icons King Creature who supplied much of the support, and Route One Booking, who have none other than man mountain Ben Ward of Orange Goblin at its helm.

No surprise then, that OFGB were the headline act on what was a stellar line-up. With the weather gods once again on our side, the first surprise was the actual set up at the venue. Acres of space, a separate bar area with plenty of seating, good choice of beverages and food and an excellent and friendly vibe. It all pointed to a good day and plenty of value for money. And so it proved. 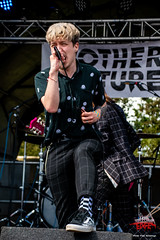 I first saw Mother Vulture at Fuel Rock Club in Cardiff in August 2019, supporting M2TM alumni Fallen Temples and Staffordshire’s The Black Hounds. The Bristol four-piece owned that evening and despite the pandemic, Mother Vulture have maintained their trajectory with new music releases. There is no substitute for live shows and with a couple of gigs already under their belt, the band, operating as a three piece in the absence of bassist Chris Simpson simply exploded out of the traps and blew any lockdown cobwebs into the next county. There are few who experience this band and are anything other than amazed but the sheer intensity and raw energy that their punk fuelled rock brings. Guitarist Brodie Maguire refused to stand still for a minute, vocalist and human dynamo Georgi Valentine’s hybrid cross between Axl Rose and a young Robert Plant hits every sweet spot known to man, and drummer Matt West was only constrained due to his role on the stool. New song ‘Waves’ sat comfortably between older faves like ‘Mr Jones’ and ‘Joker’s ‘Smile’. Maguire’s finale including running across the concrete girders that formed the front barrier before racing a full lap of the arena, setting a level that other tried but none matched as the day went on. A blistering start to the afternoon’s proceedings.

Following Mother Vulture is turning into one of the most cursed slots in the music world, but fair play to White Raven Down, they gave it their best shot. The Essex quartet were clearly overjoyed to being back on stage, and may have hit the gas a little too hard in the first couple of songs, as vocalist Will Taylor acknowledged. It didn’t stop the band getting stuck into a solid set which contained tracks from their EP and singles, and a nice little Sabbath segment throw in for good measure. Guitarist Stu Bailey rarely stopped urging the slowly swelling crowd to get involved, whilst Taylor’s foray into the crowd saw a fatal slip that unhinged the radio mic and it was time to hightail it back to the sanctuary of the stage without missing a lyric. Fair play, that was dedication. They may not have such memorable tunes but White Raven Down give it everything and they are certainly a decent watch in a setting like this. 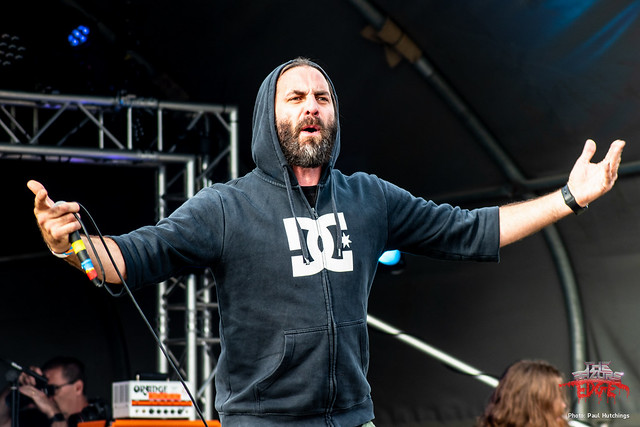 If the first two bands represented the new blood in the world of hard rock, Raging Speedhorn are now moving towards the veteran stage in their career. Although the band has changed line-up in recent times, they remain a formidable line-up even with one guitarist short, and with Frank Reagan joined by fellow throat chuckler Daniel Cook, the band still retain an energy to match Mother Vulture. Utilising every inch of the stage and a bit more, the front two prowl like caged lions, with Cook venturing further into the crowd whilst the band slammed through a 40 minute set crammed with goodies. If you’ve not seen Speedhorn before, and there really is no excuse not to witness them at least once in your life, then imagine being slapped around the head with a wooden plank. It’s brutal, aggressive and ultimately catching groove-ridden breakdowns that saw the first ferocious pits of the day open up, a brave move powered by Stella Artois, Thatchers Gold and a lot of bravado on a solid concrete floor. If anyone was thinking of a quick snooze, these are the guys to shatter any relaxation. A long drive to get to the venue was ultimately provided worthwhile thanks to an excellent response. They may have been around some time, but there is plenty of life in the Corby outfit’s tank.

It’s hard to believe that Massive Wagons have been plying their trade for well over a decade so it should have been no surprise that, given their current momentum, they took the mid-point slot of the event. With the band having been part of the successful Download Pilot, there was a certain swagger in their boots as they took to the stage before delivering a high-octane and professional hour of songs old and new. They might not be a band that I get exceptionally passionate about but for a great party with some solid rock n roll tunes. You can’t go far wrong with them. In frontman Baz Mills the band possess a dynamite frontman, whose energy fitted in nicely with the tone of the day. Five albums under their belt, and now on Earache Records, there is little to scare the Lancaster outfit and they were confident without any arrogance. Certainly one of the more unexpected surprises of the day and great to see so many smiles both on and off stage as they finished with their anthem ‘Back to the Stack’.

Seven days had passed since Phil Campbell and the Bastard Sons owned the Friday night at the Steelhouse Festival but it’s never a chore to watch the Welsh outfit. With Andrew Hunt once more leading the line with style and confidence, PCATBS simply ooze quality. I’ve seen the band many times and their mix of own songs with a fair smattering of Motörhead classics always brings a smile. For Mrs H, this was her first time seeing the boys and she loved every minute. The setlist unsurprisingly mirrored the Steelhouse show, with ‘We’re The Bastards’ kicking things off and ‘Killed by Death’ closing the show. The mandatory “fuck you Tyla Campbell” brought laughter, whilst the dedication of ‘Ace of Spades’ by Phil to “the three we lost this week” brought a lump to the throat and much action in the pit area. If there is one thing that song will do, it’s to bring grown men into a drunken circle to smash each other about and yes, it worked once more. A long drive for the band was worth it for everyone in the arena and hopefully, the reaction was enough for them too.

26 years of beer and metal, but the juggernaut that is Orange Fucking Goblin Baby shows no sign of slowing down. Although the band have made a line-up change for the first time, new bassist Harry Armstrong is a gnarly veteran and the ideal replacement for Martyn Millard. His windmilling and fast fingered bass lines proved that you can drink all day and still deliver the goods (generic postman pun there!!). Harry looked comfortable from the off but by the time ‘Quincy The Pig Boy’ raged across the darkened arena, he looked like the proverbial porker in the brown stuff. Amazingly, this was OFGB’s first ever Cornish appearance and it was a cracker. A setlist that threw in some lovely early tracks, as well as more recent favourites. Opening with the meandering ‘Solarisphere’ and ‘The Ballad of Solomon Eagle’, OFGB covered their catalogue nicely. Even the technical gremlins on ‘Quincy’ didn’t dampen the spirits. Frontman Ben Ward was as enthusiastic as ever, roaring his approval to the punchy pit warriors, cheering the crowd and demanding attention. Other highlights included ‘Blue Snow’, ‘The Man Who Invented Time’, an ice blast of ‘Seek and Destroy’ and a blistering ‘Sons of Salem’. It’s rare that OFGB let you down, and this show was another triumph in a long list of triumphs.

There is little else to add expect to say that it was brilliant day. Smoothly organised, friendly and with six excellent bands, the road to normality appears to be in sight. 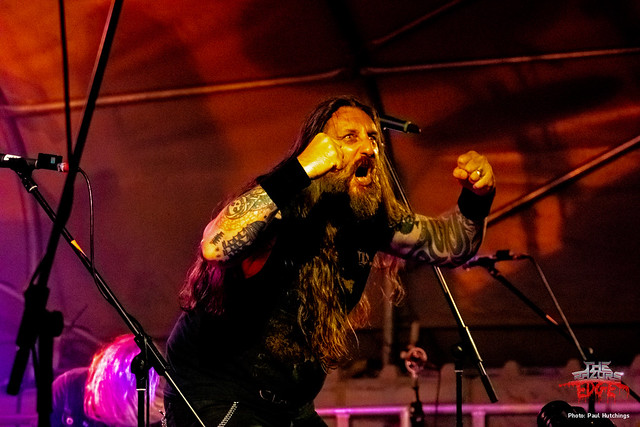