So, another new Destruction live album is upon us, I got into a little bit of trouble with my review of the last live album, 2020s 'Born to Perish', it was a very good live representation of the band, and in my defence, I was only guilty of wanting more songs and perhaps a greater representation of newer material. Well, I'm pretty sure that my comments and opinion held no sway, but for some reason or another, my prayers have been answered, and the new 'Live Attack' release sees the band, like many other bands during these testing pandemic times, having to come up with a different way of getting across to the fans and performing a full-blown live show but obviously behind closed doors.

The result of this show, filmed back in January, is a 21 track setlist, plus a very cool little solo spot called 'Damir's Shred', that spans the entire back catalogue, except thankfully the Neo-Destruction releases, and with 14 full length releases and several EPs to choose from, the song selection, is very strong, obviously we get a lot of the old evergreens; 'Curse the Gods', Bestial Invasion', 'Mad Butcher' and 'Total Desaster', for example, as well as many others, but they also add a few surprises into the mix with other old classics like 'Death Trap' and 'Sign of Fear'. I am also pleased that they play quite a lot of newer tracks, in fact 8 of the 21 tracks are from the post-reunion era. The likes of 'Under Attack', 'Betrayal' and the wonderful ' Armageddonizer' with its singalong refrain of "None the wiser", it's just a shame that there's no crowd to sing it back. 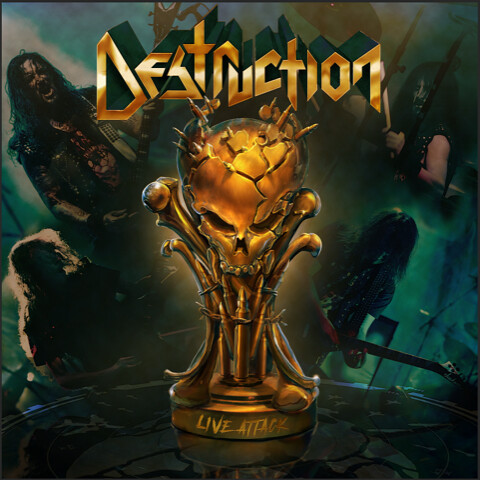 'Live Attack' is available as 3-disc Vinyl, digitally and a combined CD/Blu Ray digipak. My review stream only had two visual clips available, but from both those songs, the amount of detail and thought that the band have used is very impressive, 'Reject Emotions' for instance features old footage of the band from back in the day, when Harry (guitars) and Olly (drums) were in the band, inter-spliced with the new performance, and it really works very well. Also on the Blu Ray is a plethora of goodies, like before and after show footage, and how much effort and work goes on behind the scenes to put on a show like this.

Sound wise, as you'd expect, this is an absolutely top-notch sounding album, the bass, drums. guitars all working in tandem to create the perfect mesh of 4 instruments, and on top of all that Schmier's screams and barks sit perfectly in the mix. Similarly, the performances by all 4 band members is nothing short of exemplary, Randy Black is a monster behind the drum kit and the already mentioned Damir on lead guitar is a fantastic addition, his renditions of the old material is terrific, and his contributions to the new material, also greatly enhances the songs. Obviously, the old boys are nothing short of superb also, Schmier is such an underrated bassist, and here his distinct style and sound add that irreplaceable bottom end groove, while his unique vocals are in great form. Mike has always been one of my favourite thrash guitarists, I very much prefer the heavy riffing side of things to the flashy, and Mike's singular technique is so distinctive, almost chaotic in its delivery.

This is a fantastic package that the band have put together for the fans, both audibly and visually, and as a long-time fan myself, I'm really looking forward to getting my hands on my copy when it arrives in the post. If you're a Destruction fan, this is a must.

(Note: Since finishing my review, it has come to my attention that Mike Sifringer, the only band member to have performed on every single Destruction and Neo-Destruction release to this point, has unfortunately become estranged from the band, and has not been replying to messages from his bandmates. I, and everyone at The Razor's Edge hope that Mike is well both physically and mentally and want to wish him all the best for the future, whether that destiny lies with Destruction or takes another path.)