Despite not being a well known name, Sweden’s Netherbird have been a steady and reliable source of quality melodic black metal since the bands inception in 2004 with multiple E.P.’s and albums released in the years since. This year sees the release of their sixth album Arete and it is the third instalment in a trilogy of albums that started with 2016’s The Grander Voyage and continued with 2019’s Into The Vast Uncharted. 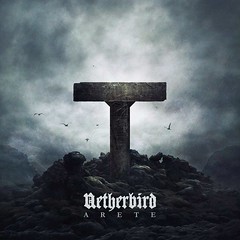 Like the vast majority of melodic black metal the sound is rooted in the foundations set by Dissection in the 1990’s but Netherbird have enough going on here to ensure that this stands out on its own merits and isn’t simply a retreading of what has been done before. Songs such as Towers Of The Night, Infernal Vistas and Carnal Pentiment are very traditional sounding melodic black metal with the engaging mix of melodic tremolo riffs, blast-beats and harsh vocals but there are variations on the theme such as Void Dancer which drops the pace and is a far more atmospheric and highly melodic song and definitely one of the highlights of the album. Myste is another song that drops the pace at times and is one of the far more melodic sounding songs on the album.

Performance wise there is nothing that can be criticised here. The guitar playing from Pontus "Bizmark" Andersson and Tobias "Tinitus" Jakobsson is wonderful with gorgeous melodies and luscious solos galore whilst the rhythm section of bassist Micke "M.A." André and drummer Fredrik Andersson is rock solid with some highly impressive and effective blast-beats from Fredrik. The vocals from Johan "Nephente" Fridell are the raspy roar you expect from this genre and remains highly effective.

Arete is an album that plays to all the strengths of the melodic black metal genre. It doesn’t really stray from the tried and tested formula of the genre but if it isn’t broke then don’t fix it. It is very Swedish sounding and if you are a fan of fellow countrymen Dissection, Naglfar and Necrophobic then there is plenty for you to love here. Netherbird impress with the sheer quality of their music and Arete is another strong and highly enjoyable album from the band.