Garden of Burning Apparitions is full-length number five from the Maryland / Pennsylvania Grinding Powerviolence powerhouse that is Full of Hell. Having formed in 2009 and releasing their first music only a year later, the band’s output is an epic list of EPs, splits, collaborations and live albums, intermittently peppered with full length releases.

As a slave to the grind, it’s heartening to see bands like Full of Hell, Nails and Trap Them, among others, carrying the flame and, even though there looks little stopping Napalm Death, Pig Destroyer, et al. to know the future is safe in their hands is comforting.

Garden of Burning Apparitions is as complete a grind record as you’re likely to hear and serves as an educating tool to those who see the genre as nothing more than a wall of noise. I mean, it is, but it’s also more than that and in Full of Hell’s hands it becomes a journey into sound.

While the dozen compositions of Garden of Burning Apparitions are all rooted to some extent in the ferocity of pounding drums, dirty bass and whirlwind guitar, all capped off with screeching vocals, there is far more than initially meets the eye. Asphyxiant Blessing features a massive riff and a strangely hooky guitar part while still maintain huge slabs of aggression; whereas Urchin Throne’s uncompromising brutality has the coda of jazz elements. 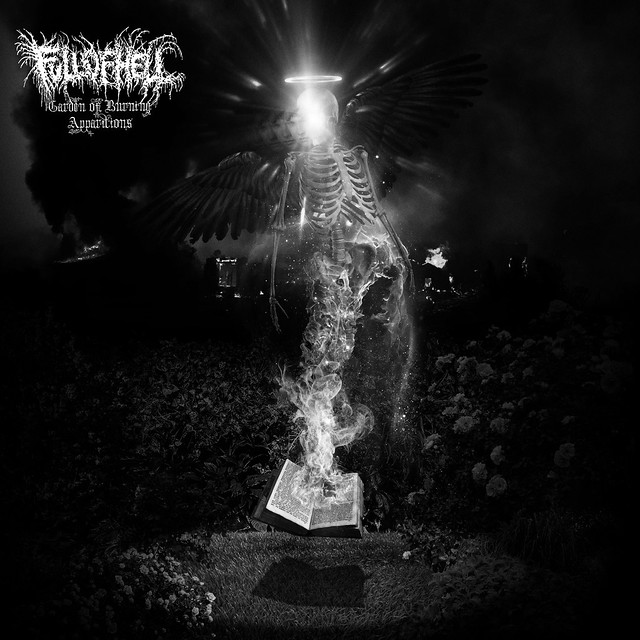 With All Bells Ringing, Full of Hell pull off an uncomfortable triumph by creating a song that is both deeply dark and unerringly upbeat, giving it the feel of a manic depressive trying to appear cheerful.

Elsewhere, you’ll find death metal dominating Eroding Shell and an industrial vibe across Burning Apparition, complete with its own coda of circus music, and even some of the blackest metal you’ll hear all year amid the noise of Derelict Satellite.

The noise elements are most apparent on Reeking Tunnels, which begins with a more classic tone and structure before veering into the alternative rock arena occupied by Helmet, Unsane and Today Is the Day. Non-Atomism eschews structure as, like Derelict Satellite, it becomes more about the sounds with the pure noise being blended with psychedelics.

Full of Hell bring Garden of Burning Apparitions back to the grind with Celestial Heirach; build around the traditional grinding elements it somehow sounds comforting that, after such an eclectic journey, we are brought back to a familiar space. There is one final trick and just when you think the song and the album are going out on a massive climax, it ends in cosmic feedback; Full of Hell’s WOW signal, perhaps?

Short and to the point, yet endlessly fascinating, with Garden of Burning Apparitions Full of Hell again ably demonstrate the art of breaking boundaries and show themselves as being worthy standard bearers.