Having pulverising listeners with their barbaric self-titled 2019 debut the French Canadian four piece return, armed to the teeth to devastate listeners with a new collection of knuckle dragging slamming brutal death metal, all wrapped up in stunning artwork from Andreas Chistanetoff of Armaada Art.

Human Deviance Galore is an ugly, ugly album (that is meant as the highest compliment). Ten tracks of festering wretched brutality which will satisfy anyone looking for a fix of pure straight up audio battery. NecroticGoreBeasts debut from 2019 was a solid well put together record and Human Deviance Galore has seen them evolve as artists and grow stronger whilst not changing who they are as a band and what they bring to the table, what they bring is better, more refined, and just plain crushing. The straight up brutal death metal riffing catches your attention a lot more while weaving into huge slam riffs which have much more substantial feel to them while remaining downright filthy.

NecroticGoreBeast guitarist Michael Chamberland brings a collection of big bully riffs that will do everything but come up and steal your school dinner money, the speed and precision is ferocious, and the slamming sections just devastate beginning to end on Human Deviance Galore. The rhythm section of JP Bouchard - Drums and Alexandre Brochu - Bass adding an extra dose of power, the overall drum sound on Human Deviance Galore is so much more on point than the band’s debut. Frontman John Mayer’s performance of disgusting guttural vocals makes me question if he actually recorded or just threw an SM58 into the room whilst unblocking the sink & toilet. 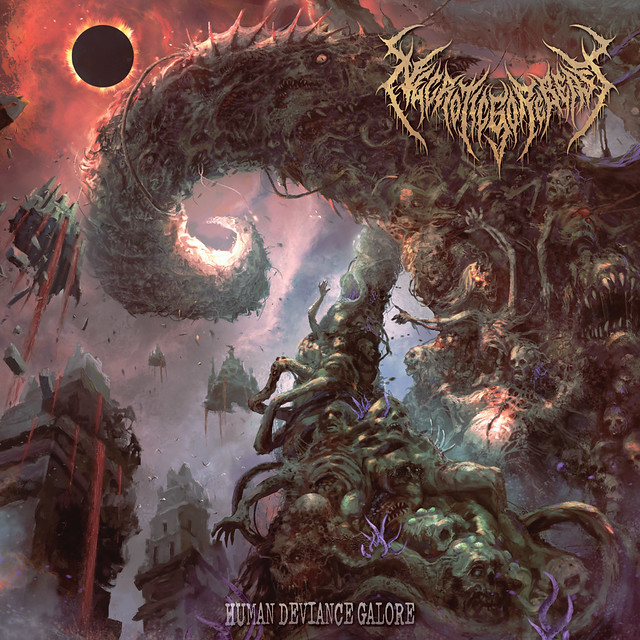 Human Deviance Galore is not going to be everyone’s cup of tea, yet if you can’t get enough of IQ lowering brutal death metal full of caveman riffs, thundering blast beats & echoing guttural vocals I would strongly suggest you hunt this down.