Who doesn't like a farmer's market and all the free samples you can pick up; from the cheeses, meats and best of all, alcohol (craft beers and gin are all the rage), from all that the best that local produce has to offer, the biscuit you get when you order an overpriced coffee at a well-known coffee shop chain or the air freshener that gets put around your rear-view mirror after you've gone to the local car wash? It's always nice to get free bonus stuff. Make no mistake though, there's no such thing as a free lunch. These items that I've spoken off are all paid for in one way or another, so would you fancy a whole meal of farmer’s market free stuff? Nothing but small biscuits instead of crap, corporate hot drinks? And instead of your car being cleaned it is just being smothered head-to-toe in air fresheners?

Well the good people at AFM records have done just that. They've been knocking out quality heavy metal for years and no doubt we all have at least one or two CDs in our collection from this fine corporation. It's not a stretch of the imagination to say that within these CDs from said record company we have bonus tracks of some description. Well now, AFM have had the idea of putting out a two CD digipak at a reasonable price that feature nothing but the very best in Japanese bonus tracks, extended versions, live tracks, digital/vinyl release only songs, session tracks and orchestral versions of various bands on their roster.

As you would expect we get plenty of Euro metal with a smattering of different styles which include black metal, thrash metal, nu-metal and hard rock. We also get what every compilation album of various artists should do, as well as known established acts we get introduced to smaller bands that we have yet to hear of.

U.D.O kick things off with a slower, groovier song called 'Falling Angels'. Firewind produce Euro power metal with a sentimental chorus with their offering, 'New Found Power'. Flotsam and Jetsam, the veteran thrashers do what they do best on 'Life, Love, Death', and chart bothering Eurovision winners Lordi give us a poppy upbeat metal anthem called 'Hulking Dynamo'. 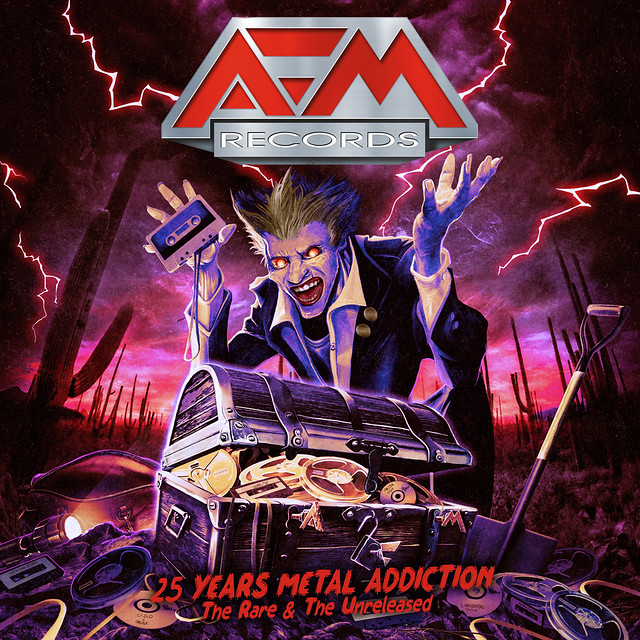 The array of cover versions spans the spectrum. Elevenking do a faithful version of Iron Maiden’s 'No Prayer for The Dying', Mors Principium Est give a complete death metal rework to 'Living' La Vida Loca' by Ricky Martin and Deaf Rat give a rework to Madonna's 'Like a Prayer' that other than the vocal melody, sound nothing like the original and could possibly be a different song if they had released it with different words.

My personal highlight of the album is by Dragonland and they're offering, 'At the Inn of Eamon Bayle'. It starts off as if the house band of Game of Thrones have recorded a bonus track. All tin whistles, violin tinged, folky working class lyrics… and then the drumming starts. They are lightning quick, so quick in fact that the drummer could be playing four or five times faster than the song actually is. It's quite a display. Ridiculously brilliant.

The album cover features a “Joker” like character guarding a treasure trove of lost demo tapes and CDs. Who can forget the first time we bought a CD and left it playing after the final song has finished, through the 10-minutes of complete silence only to discover a hidden track. It's like the band have given you, and you only, access to a one-off recording. (unless your English indie rock band Ash who put their Bonus track at the very beginning and programmed the CD to start 25 minutes into the CD which meant that if you immediately started playing the album and reversed it for 25 minutes you could hear the hidden song).

Chances are, if you're into the bands who feature on this compilation you've already heard or have these so-called unreleased tracks somewhere, but the special price and a handsome package you won't be grumbling too much at all the “extra” stuff on offer.