I’m going to go as far to say that Cradle of Filth need no introduction. Suffolk’s most infernal export have been creating their ungodly racket since they emerged back in the early-nineties and have barely let up since. Although the band has been an almost revolving door of musicians, that their output over twelve studio albums and four extended players has been surprisingly consistent and of the highest quality is hugely commendable and down to the dedication of Mr Filth himself.

Couple that with the extreme Marmite opinions of the band – often centred around Dani’s vocal style – then their longevity and the fact that, like ‘em or no, Cradle of Filth are National Treasures and as important to the UK extreme music scene as Venom, Napalm Death or Carcass.

It’s always a big deal when the band vomit forth a new long-player and for this one, being their thirteenth excretion, seems that the weight of expectation is higher than it was for either Hammer of the Witches or Cryptoriana – The Seductiveness of Decay. Not that there is anything wrong with the last two records but with Cradle of Filth being an entity in almost perpetual motion it was going to be interesting to hear what a period of enforced inertia would produce.

This deep into their career the band were never going to be taking a hard left turn and producing a Alt-Rock album, but the gothically grandiose instrumental, The Fate of the World on Our Shoulders, begins Existence is Futile in a classically bombastic way. All of the Cradle of Filth tropes are present across the album: from Dani’s alternating gruff, guttural, choppy delivery to the trademarked high screams to the huge keyboards and a twin-guitar attack in which Richard Shaw and Marek Smerda seems telepathically in tune with each other.

Oftentimes, amid the sheer theatrics of the Cradle sound, the work of the guitarists is criminally overlooked as they seamlessly switch from dirty Black Metal to clean Classic Rock at the drop of an undertaker’s top hat. Listen closely to Necromantical Fantasies and The Dying of the Embers and the guitar harmonies are worthy of Murray/ Smith/ Gers or Downing/ Tipton.

All of this is underpinned by the rock-solid rhythm section of bassist Daniel Firth and drummer Martin Skaroupka, whose frenzied percussion on the likes of Black Smoke Curling from the Lips of War and Crawling King Chaos - which the band premiered at the Bloodstock festival back in August – show how integral they are to the overall Cradle of Filth sound. 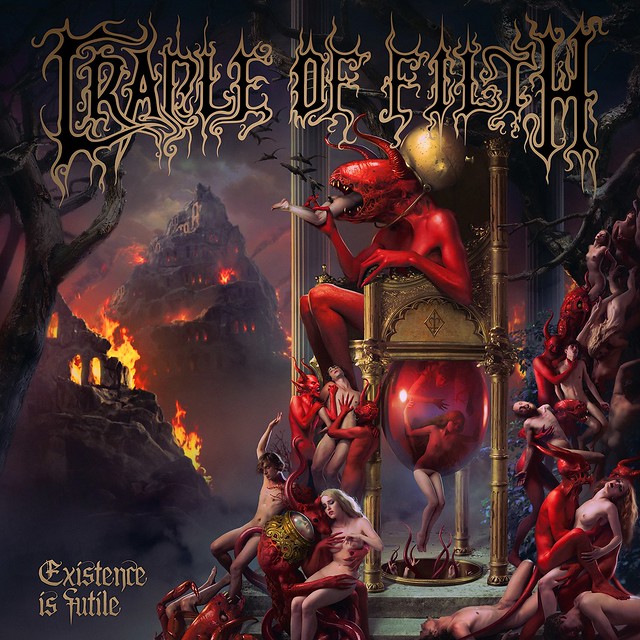 Many have played the female counter to Dani and that position currently belongs to Anabelle Iratni, whose keyboard sound is the equal to the other musicians and her portrayal of this record’s version of Lillth or an ever-present Succubus feels the most present since Ashley Ellyllon filled the role on 2010’s Darkly, Darkly Venus Aversa album.

As with all Cradle of Filth records, it is the ringmaster himself, Dani Filth who draws the most attention, both as creator and driving force behind the whole concept. Existence is Futile sees Dani’s vocals somewhat reigned in, with his visits to the higher registers being more infrequent as he delivers a lower, more throaty, but no less compelling, performance.

All of the usual Cradle of Filth imagery are used on the record, inspired as ever by the ideas of the Romantics, Satanism and Classical Gothic Literature; yet Dani rarely receives the credit his ever-inventive wordplay deserves.

Marketing is not my particular forte but I like it when Cradle of Filth release an album at this time of the year; it just feels the right time sit and discover it, an open fire roaring in the hearth and casting shadows on the bare stones walls as you browse a leather-bound book of forgotten lore. Maybe the slowly darkening afternoon brings with it the howl of a creature out on the moor, or maybe it’s just the sweet music of the Children of the Night!

Whichever side of the divide you occupy, whether a devotee or a denier, there is no getting away from the band’s position as a British Institution and, as such, a new album should be a thing to celebrate. Just as Napalm Death and Carcass are showing no signs of mellowing, neither is Dani and his company of demons. Existence is Futile is solid evidence that Cradle of Filth’s claws are deeply rooted in the souls of their acolytes.