This has been an album I was highly awaiting for quite some time. In 2019 Worm released their sophomore studio record titled Gloomlord, it was a major hit for the band and was amongst my particular favourites of that respective year. Now two years down the line and with a plethora of new fans, myself being one of them, Worm now seek to unleash their third full length album upon us and with, what seems to be, greater resolve. The band aren’t exactly new however since they started back in 2012, hailing out of Florida, United States, the home of many a legendary band (Deicide, Death, Morbid Angel etc) however in their early days Worm played black metal as their debut 2014 Demo The Deep Dark Earth Underlies Us All signifies. This element of black metal continued through their 2016 Demo Nights In Hell and, predominantly present throughout their first full length release with Evocation Of The Black Marsh. However in just two years the band went through a considerable transformation whereby Gloomlord saw the band decked out in death/doom aspects and frankly this seems to have really worked out well in their favour. Foreverglade, teased for months now, finally sees the light of day come October 22nd and as someone who has been ready for a follow up the moment Gloomlord bowed out back in 2019 I was ready to get fully invested into it. But how can Worm live up to the massive expectations they’ve now created in the hearts and minds of fans? Let’s find out.

There seems to be a much thicker atmosphere and tone to this album than their last release. I’m not merely talking about the guitar tone itself in conjunction with what the primary riff work is able to deliver. If you pay attention even right from the outset, the drumming has quite the clear impact as well as a thicker strike to its performance. That’s not just the bass drums for once as even the standard Tom-Tom drums have a greatly enhanced sound to their strike, all in all Worm seem to have really knuckled down on how to create a murkier and much more dense soundscape. The guitar work falls on you with much greater mass and tonal devastation, their sound was always ruthless but it’s never felt so dramatically crushing. If their last album was akin to being alone amongst a putrefying swamp, then this record is the sonic equivalent of descending into some nightmarish, otherworldly plane of unreality which you can’t comprehend. If we observe the artwork, (which is fantastic if I may add, fans of Tomb Mold’s Manor Of Infinite Forms may recognise Brad Moore’s artistry) that kind of crazed and dimensionally haphazard scenario is the very soundscape Worm formulate here for you. Even though the album on the whole sounds like it was never going to hold back from the first moment of its duration, the overall production and amplification from practically everything they did on Gloomlord is striking.

I absolutely adore the way the band handle their guitar work on this record and that’s even before I divulge into the soloing side of things. The overall guitar work is one that feels to have been emboldened since their last record, therefore the riffs hit you with not only more clarity but as if they’ve started wielding knuckle dusters. The impact and direction and even the perceived shape of the riff work is greatly more defined and realised than even what has been already stellar guitar work and songwriting with Gloomlord back in 2019, a record I personally played front to back so many times over. Full frontal displays of speed are not what Worm are going to treat you to, this is death/doom with a flair for the latter and on that intention comes songwriting that isn’t afraid to slow down. The band are more than happy to take their time at demonstrating what they’ve come here to do especially when you can have an 11 minute track like “Cloaked In Nightwinds” and still have a segment where the riff slows right down to a crawl only for the band’s sound to become all the more satisfying and realised. But Worm know how to excel at slower tempos exceedingly well now and when their songwriting suddenly shifts from a steadier pace to something that oozes doom with great prevalence, it works so well to the extent that it induced goose flesh and the hairs on my arms to rise. There are sections on this record where that doom edge crept in and was then harnessed to its maximum potential, and I could genuinely feel a cold shiver creep through me. There are times where the riffs are crushing you with such methodically timed and wondrously synchronised strums done so well, it’s striking to wonder how many other bands have been unable to achieve a semblance of this level of band coordination. 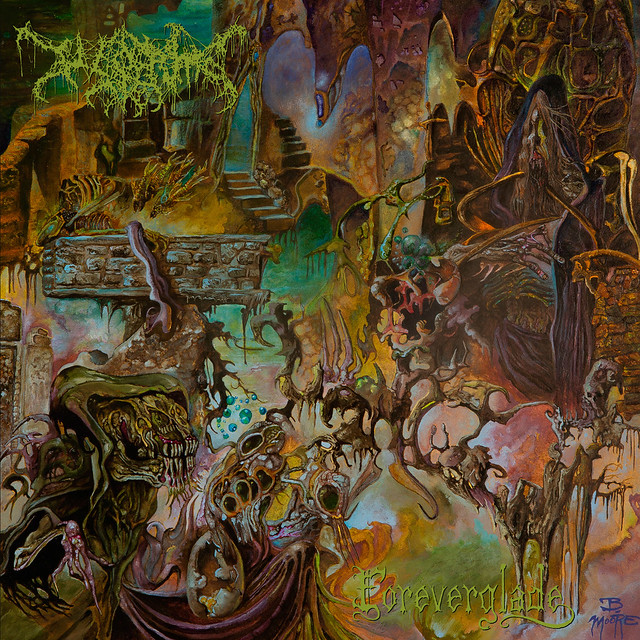 The freeform guitar work and the soloing on this album is worthy of its own mention. When you think about a rudimentary guitar solo from any conventional metal band, you think of maybe a sporadic spray of note playing that sounds wicked to listen to but might not add that much to the greater picture of the record in question. Worm pull the complete opposite in this respect as when you hear their soloing going on or when the guitar work seems to climb a pitch higher, you are instantly drawn towards it because of how much power it possesses. The direction, the transparent clarity and the utter beauty the soloing captures on this record is outright spectral. This is some Death-esque level of songwriting quality the soloing emits and I love how deliberate the guitar work seems in these instances. It’s absolutely precise. The technical accuracy the band brings to the soloing begs belief and what’s great is that you’re treated to a full swathe of solos and guitar techniques to keep you invested and forever waiting for the next “hit” so to speak because it is like a drug. The quality of the soloing here is like an aphrodisiac, you honestly feel better hearing these pieces throughout the record and what’s more the soloing acts as an extension of the atmospheric side of the album. The soloing and that precise guitar work feels incredibly aligned with the record’s overall immersive capacity and when a piece like the one we see during “Subaqueous Funeral” or “Murk Above The Dark Moor” (a favourite of mine) plays, it heightens the power of the band’s soundscape to gilded and unforeseen peaks.

If anything it’s the vocals that foremost capture the true evil to this record but also the vast scale that the band are going for this time round. In the past Worm’s music has always had a sense of deformed grandeur to it, yet this is the first time it’s really felt like they’re going the extra mile and giving us something much more expansive and deeper than they’ve done before. Vocally you’re not going to make out a word of what is being said but that doesn’t matter, they’re an atmospheric ploy. What makes them work so well isn’t simply the fact they’re rather deep but it’s how they seem to bounce off every angle and edge of the record’s shape, you’re always able to feel the effects of the prolonged and sustained vocal bellows they’re prepared to give you. It’s not a vocal performance where you’ll feel assaulted by the delivery but rather, one that is slowly wrapping itself around you and by doing so that’s how you can make out the sinister edge bleeding into the songwriting. It’s an enveloping yet gentle suffocation, one that twists what you think you want and gives you something you realise you now need.

It’s worth noting the atmospheric elements here as well. They may not be around for very long on their respective tracks, but when they’re utilised they feel so fantastically implemented for what the band want to achieve. Whether it’s the tolling of bells (“Murk Above The Dark Moor”) or some synth work (“Cloaked In Nightwinds”) etc the band inject some additional life into their sound and furthermore, their immersive capabilities. They’ve only got six tracks to make you feel completely surrounded on all sides by this record’s ambiance so they need to make the atmospheric techniques count, and I would say that coupled with the general songwriting they succeed at that too. Sometimes the atmospheric arm of this record doesn’t need to be based in any typical piece of ambiance or any sampling; it can be a result of the band’s own performance. The simple slowing down in places before the lone cymbal strike kicks things off again, the Bass tone’s lingering and seething anger that just projects from its sustained utterance, the deep and throaty vocal reverb that you can practically feel and touch at the back of the record; the band made sure that you can feel the full scale of their sound without it seeming so massive that their sound would struggle to reach the furthest reaches of their ambitions because this is a sonically ambitious album; certainly more so than their previous attempts. In short, the band have gone for a far grander scale than their previous attempts but the album isn’t so metaphorically massive that it feels empty or hollow; if anything the record is bursting with power and you can feel the album taking on a life of its own as it continue to play for you. From an immersive perspective, Foreverglade succeeds on all fronts at pulling you in and possesses zero desire at letting go until it says so.

In conclusion and simply put, Worm have absolutely outdone themselves. 2019’s Gloomlord was a breakout success for the band however Foreverglade is where I think the eyes are really going to start opening for a lot of people in relation to Worm. We are now ten months into the year and only now do I think i’ve finally encountered an album worthy of being an Album Of The Year contender. Everything we have heard from the band before has been refined and then perfected with Foreverglade; the production has a meatier foundation where the bass, riff tone and vocals seem to strike with deadlier yet a more localised and precise target. The drums are eclectic and are always active yet never work up themselves too greatly at the risk of turning your attention away from the grander scheme of the band’s atmospheric, cerebral purposes herein. The riff work, combined with the overall band’s performance, paints a picture of an exquisitely well coordinated and structured approach to songwriting where nothing feels inserted without prior reason as to why it should be included. There isn’t a riff or vocal bellowing or drumming segment that feels unnecessary or thrown in for superficial design. I am genuinely going to struggle to get this album out of my head and I couldn’t be happier about it. Worm have crafted an album they should be proud of themselves for making and I know for a certainty, this will not be the only time this year I listen this album. As of writing this, October 3rd, there are still a feasible eighty-nine days left to the year and I could easily play it front to back for every single day until 2022 begins. Laid to rest amidst plasmic matter turned corporeal, this is Foreverglade. What an album.

Favourite tracks: “Murk Above The Dark Moor”, “Empire Of The Necromancers” and “Centuries Of Ooze”.