We’re in Glasgow tomorrow, announces front-man Colin McFaull, and this one always goes down well up there. Of course, this is said with a tongue firmly planted in a cheek as Cock Sparrer are about to play the penultimate song of their set, England Belongs to Me, which probably elicits a very different reaction north of the border than it does in Manchester.

Fast approaching their fiftieth anniversary, Cock Sparrer are a bona-fide punk institution, and you don’t get that way by short-changing your fans; so, despite their collective advancing years, the Sparrer boys step out onto the Academy’s second stage with a hunger to slake and a rabid mob to entertain.

Back at Holidays in the Sun, Sparrer put on the perfect headline set, but it was clear the lockdown had left them a little rusty – like a fighter having been out of the ring for a time, the class was obvious, they just needed a couple of rounds to warm themselves up. But since the start of September Sparrer have been treading the boards every weekend and now they are back to being the lean-mean wrecking machine we know they are.

A siren wail fills the dark as the band take the stage and the place erupts as Riot Squad begins. For some this is the first time out since lockdown, for others it is just a pleasure to see the band in the flesh again as this tour, delayed by thirteen months due to Covid, was announced more than a year before the original dates were due to happen.

McFaull acts as conductor and choir master, leading the crowd through the usual suspects of Working, What’s it Like to Be Old? and Runnin’ Riot. They even manage to counter the accusation that they don’t include enough material from their Here We Stand album by not only playing Suicide Girls but also the deep-cut, Sussed.

For a band with half a century under their belts it’s a shame Cock Sparrer have only produced seven full-length records, but when the quality is this high it is an oversight that can be forgiven. Tonight’s set visits six of those seven albums, with only the self-titled debut not being called upon. Even Two Monkeys from 1997 gets a shout in the shape of album opener, AU.

As one of the leading lights of the Oi! scene Sparrer’s musicians weave some deceptively complex tunes and dress them up as simple Streetpunk standards. Guitarists Mick Beaufoy and Daryl Smith are not averse to shredding a little when the need arises and all of this is built on the rock-solid rhythm section of the two Steves – Burgess and Bruce.

That the bulk of the group have been together from the word Go leads to a consistency in the song writing and in the overall presentation of the band. There appears to be a telepathic connection between the five members and a spiritual connection with the fans. They even invite one fan onto the stage in honour of this being his one-hundredth Cock Sparrer show.

More than half of the set is given over to the 1982 Shock Troops album, a decision that goes down well with the audience, judging by the way every word is sang back at the stage. Hand on heart, I would place Shock Troops very high on my list of favourite punk albums – up there with Inflammable Material, Punk’s Not Dead and The Clash’s debut – yet hearing those tracks played live with this level of power and passion gives them a whole new edge.

When encore time comes around the band eschew the ritual of leaving the stage, only to return a couple of minutes later, and simply continue the set with the aforementioned Suicide Girls and England Belongs to Me. As ever, the final song, We’re Coming Back, is confirmation of the familial bond that exists between band and fans; yet, every time I hear Mr McFaull lead the audience through the chorus, I know that the day is approaching when time will make liars of us all.

But, until that day comes, we have the hopes and prayers of that meeting being soon. With their name high on the Rebellion Festival 2022 poster, I know at least that our paths will cross again in the summer at the Winter Gardens. And that is a promise between friends that cannot be broken. 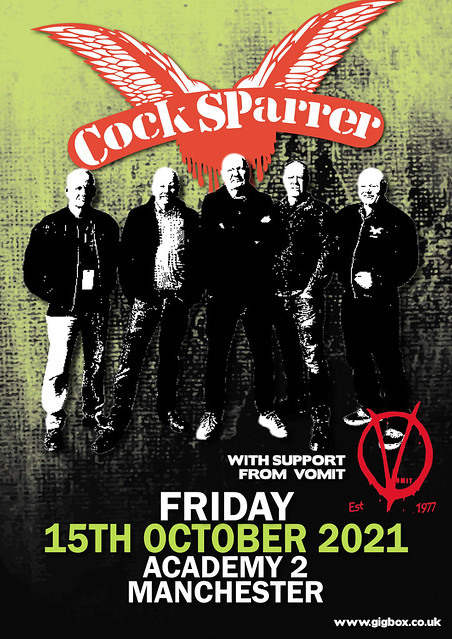