Year Zero is the anthology of London-based art-punk four-piece that were active between the years of 1996 and 2004. Not only were the band short-lived, but they were also somewhat gun-shy when it came to releases, only issuing a couple of products.

The 1998 maxi-single (remember those?) Living in Fear of Reprisals is featured in its entirety in the form of Thin Lips, Salt Leak and Scrape; the first and last being rough examples of a punk attitude and sociopathic swagger, whereas the Salt Leak oozes the sort of sleaze usually associated with the Quireboys or Dogs D’Amour.

In 2002 the band released the five-track CD, Ya Ba, heading off into alternative waters, through more mainstream and melodic Crawlfish and Sleep It Off or the seven-minute, reggae-infused Fee Bee. That’s not including the Billy Joel piano jam of Decathexis or the WTF? of Vittima Colpavole’s experimental industrial soundscape.

While that accounts for about a third of this anthology, Brazen Hussies were a mainstay of many a compilation over their brief time, gaining favourable reviews from as disparate a set of publications as Kerrang! NME and Melody Maker. Although never officially released, Touch It is a blend of 70s punk and 60s psychedelia, Superisolate lives comfortably within the area of brit-pop and The Whole World Envies Us feels distinctly American, as though the Hussies were opening for the New York Dolls. 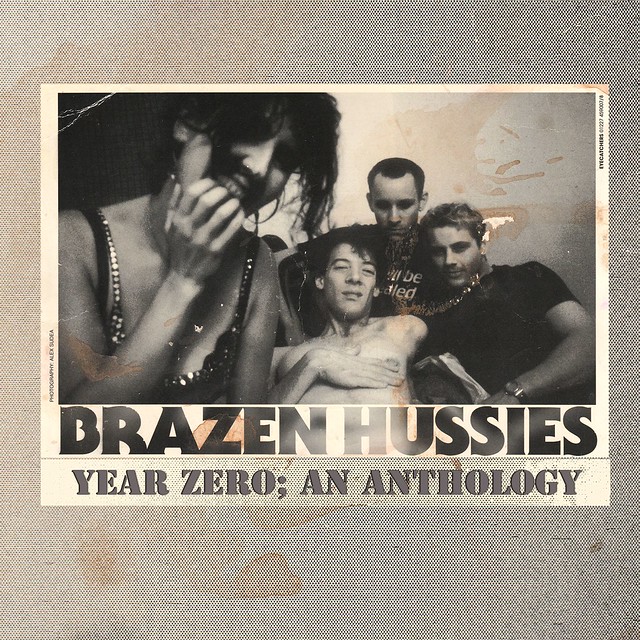 The reportedly fractious relationship between Dave Queen and Lou McDonnell can be considered responsible for the vast array of sounds and styles heard on Year Zero and led directly to the band’s early demise. Yet you can’t help but think when listening to this anthology if Braze Hussies has been more focused and less experimental they might had made an impact.

But that could well have been clipping their wings and stifled the creativity. And, perhaps, every band isn’t meant to have decades-long careers. Not content with limiting their song writing abilities to banging out three to four minute ditties, the Hussies appear equally comfortable with eight minutes of I’m Straight or the epic jam session that is Brideville, here clocking in at a smidge short of twenty minutes.

The volatile relationship at the core of the band means that the experimental nature of their output won’t please all of the people all of the time. I’d be lying if I said I’d be sad if I never heard Pop Song again but that doesn’t mean someone else might love it. The great thing about music is its ability to move the listener in different ways and, as long as it provokes a reaction, then it is meeting its purpose.

In that respect Year Zero – An Anthology is a difficult album to sum up; some of it works and some of it doesn’t but – and I cannot stress this enough – that’s a personal opinion and the parts I’m not keen on may be your favourites.

That smaller bands from back in the day, who might have slipped under the mainstream radar, are getting anthologies can only be good both for them and for us; just imagine all that untapped potential just waiting to be discovered.