Slam Dunk Festival 2022 continues to impress by announcing a thrilling third-wave of fantastic acts for its biggest year yet. Canadian punk-rock titans Sum 41 will return to the bill in the headline slot and Celtic-American punk mob Dropkick Murphys join the lineup as the festival's third headliner alongside post-hardcore heavy-hitters Alexisonfire, who were announced in September.

The ever-seismic presence of Canadian punk-rock kings Sum 41 will be a sight to behold at Slam Dunk Festival 2022. Almost two years in the making, the band were originally confirmed for 2020’s event until developments in the travel restrictions due to the coronavirus pandemic saw them off the rescheduled bill for 2021. With over 15 million records sold worldwide, a Grammy Award nomination, 2 Juno Awards (7 nominations) and countless other accolades, Sum 41 are responsible for some of the most impactful punk-rock songs of the post-millenium pop-punk era, the spoils of albums such as “All Killer, No Filler”, “Does This Look Infected?”, “Underclass Hero” and their latest “Order In Decline” taking over music video programming and record collections across the globe.

In their first UK performance since their majestic show at London’s Alexandra Palace in February 2020, Dropkick Murphys will make their debut appearance at Slam Dunk Festival as a headliner, bringing new material from their rousing latest album Turn Up That Dial as well as hits from their beloved punk discography. Since forming in 1996, Dropkick Murphys have gone on to sell 7 million albums worldwide, with 2005’s ‘The Warrior’s Code’ achieving Gold certification in the US and their seminal single ‘I’m Shipping Up To Boston’ nearing double platinum sales.

California ska-punks The Interrupters return to Slam Dunk Festival after their thunderous 2019 performance, as Kenny Hoopla, fresh from “ESTELLA//”, his 2021 collaboration with the iconic Travis Barker, is set to stun the Slam Dunk festival crowd in his first appearance. After international restrictions prevented prolific punks Pennywise from playing the festival in September, Slam Dunk Festival are delighted to welcome the band back to the bill for 2022, who will play alongside ska-stalwarts The Mighty Mighty Bosstones. Pop-punk’s rising stars Pinkshift will celebrate their first-ever festival appearance outside of the United States at Slam Dunk Festival next summer, armed with all the emo-power of their Saccharine EP. 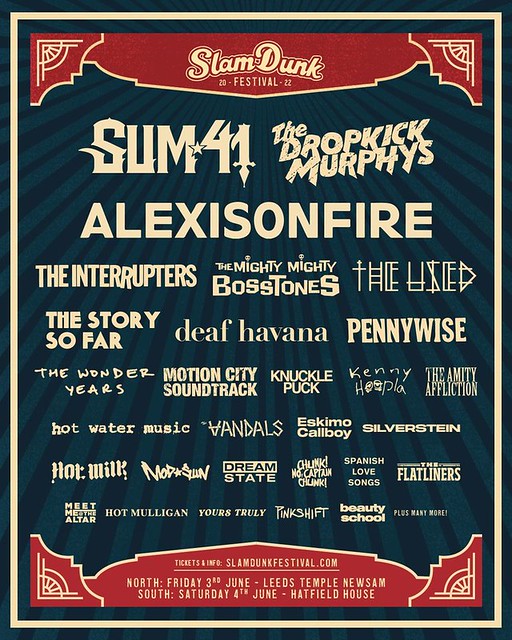