The pairing of Iron Maiden guitarist Adrian Smith and prolific guitarist Richie Kotzen have released a full length album and an E.P. this year. Heading into 2022 the pairing will take this project on the road.

For the UK that means a run of seven dates, including a show at Plant Rock's "Winter's End" festival.

Tickets go on sale this week with Iron Maiden fans getting a pre-sale from Tuesday morning, Planet Rock running a pre-sale on Wednesday and then general sale starting on Thursday from your usual ticket outlets.

“It’s always been our intention to take these songs on the road and give them a good kicking about. We’re delighted that we’ve been able to set up this tour around a very hectic 2022 schedule and we both can’t wait to finally get out there and play live.”

“We’re excited that we can take Smith/Kotzen to the next level and bring our music to the stage. We’re still figuring out which musicians we’ll be bringing with us to deliver the songs in the way we’ve always envisaged to give fans a dynamic live experience. We’re really looking forward to this tour and we’re planning to have a lot of fun!”

Smith/Kotzen’s eponymous debut album S/K was released globally through BMG in March 2021 to media and fan acclaim, charting in the UK Top 20 and also major markets such as Germany, Japan, US and Canada. A follow up EP Better Days featuring four new tracks was released on November 26th in conjunction with International Record Store Day’s Black Friday event. 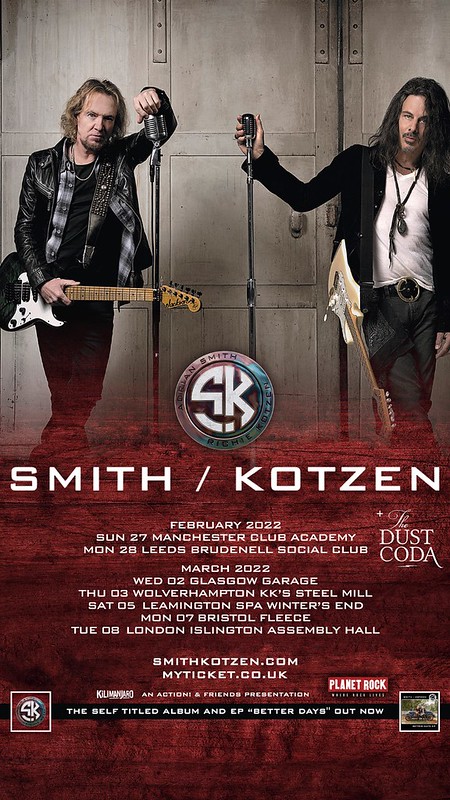