In a recent edition of his podcast, Steven “Old Head” Ivy (metal talking head, influencer, extensive record collector and all round good bloke), was quoted as saying that the term progressive has become a little redundant of late. When we think of progressive bands, we think of music that challenges the norm. Music that you can expect the unexpected from. But of late, many bands who claim to be progressive have fallen into a progressive groove. A formula, a uniform, something progressive music should never be. He continued to say that new progressive bands either have off-kilter riffs, talk about dungeons and dragons or space and have songs that exceed fifteen minutes in length. If you tick one or all of these boxes you then seem to have permission to call yourself progressive. So step forward Moldovan progressive/ modern metal band Infected Rain with their new album 'Ecdysis'. I'm interested to see whether Infected Rain challenges or supports Old Head's stand.

Infected Rain have been a band for quite some time and started in an era where DJs and made up names and aliases were essential. They have matured since those heady days and the tracks on Ecdysis certainly confirm this statement. Each riff has a new metal element which you would expect considering their background. The vocals have a throaty, guttural, harsh element blended with an operatic clean sound. Lena Scissorhands produces an outstanding performance. It has the production values that some might say are cookie-cutter, again, typical of the era from which they started. 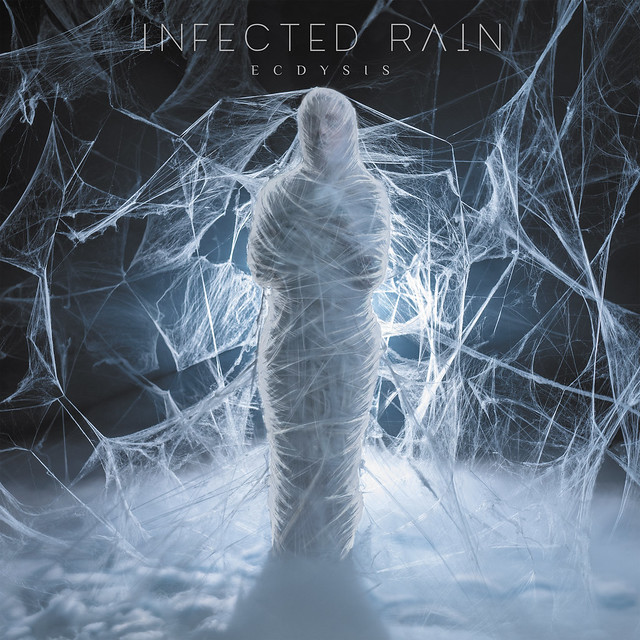 What Infected Rain does very well is that on all tracks all riffs sound comfortably unpredictable. You think you know where the riff is going. And then, all of a sudden, it jumps out and jumps back in. They have perfected the art of “did I just hear that correctly?” And then it is repeated to confirm your suspicion. It's like having one step out of time for a split second. It's like missing one beat in every eight. It's getting used to something and then having the rug pulled momentarily. They give you a 90% sense of security with a 10% chance of uncertainty which makes you listen intently. The arrangements are also familiarly unfamiliar. You think you know where the song is going but it travels off in to a different part and then another different part. At the end of the album you do get used to this. You're expecting the chorus to not be repeated and a third and fourth riff to replace the familiar. Each song has a crunchy guitar breakdown, a very slightly off-kilter time signature, harsh and clean vocals with some electronica filling in some gaps here and there.

Every song comes in under six minutes and subject matters are a little bit more social compared to other progressive bands. Because of this familiar song and riff set up there are no real standout tracks however there aren't any completely duff ones either. Does this support or challenge Old Head’s statement? Maybe the wrong band to validate this statement? They're playing to a formula. It's just not the formula that most modern prog bands conform to. Progressively progressive in their own right. Is that not what true prog is all about?