Maule have cropped up pretty much out of nowhere, having formed back in 2017 out of Vancouver, Canada releasing a Demo in 2019 which was followed up by absolutely nothing, before Maule suddenly made the announcement of their upcoming debut full length release January 2022. I’ve checked out a fair few more extreme releases as of late therefore I had no worries going into Maule NWOBHM influenced songwriting, its something I do enjoy listening to from newer bands and its always nice to have something more relaxing and easier to jump into. As with many releases I check out, I had absolutely no clue what Maule were about nor did I have any indication as to what their sound would consist of so, let’s take a look at Maule’s self-titled full length record.

I loved how crisp and clear everything was for us without it feeling like the band were merely going for some super clean performance. When I think back to what this record gave me, I don’t instantly think of a clean album sound. Certainly, the band did not give us anything murky or muddied in their mix but this was not by any means a thoroughly clean album. The persona and power this album was able to exert never pointed towards a squeaky clean production, if anything it’s because the band are just shy of a clean production that they managed to hold my attention even as their songwriting could slow the pace down here and there. Every drum strike and note played, every vocal syllable performed felt like it was easily defined and could be picked up and experienced by the listener and even then, there are aspects that won’t go noticed in a first listen. It’s a predominantly well polished album that still retains a few bumps along its exterior, granted there aren’t many but there are just enough to garner our attention and remind us the band don’t want to hold our hand, at least not all the time.

The guitar work here reminds me of lesser revered NWOBHM bands like Tank, Tygers Of Pan Tang, Praying Mantis etc whereby the riffs have this carrying essence where we’re journeying alongside them throughout the various tracks as opposed to having the wind knocked out of us, like Iron Maiden or Saxon rather excelled at delivering. It’s nice to hear the riffs as clearly as they are because sometimes a newer band can get fixated on riffs being as big as they can be, but they’ll hinder themselves by overblowing their strength thereby masking coherence. Here, Maule have certainly dialled down their riffs just a touch however it’s not so complete that their delivery is void of impact. The riffs are subtle, you don’t realise how greatly you’ve resigned yourself to the ride until you’re towards the end of a respective track and I enjoyed the way they didn’t need to blast themselves in your face to grab your attention. They blend into the rest of the instrumentation and vocal work really well so you receive this full band experience as opposed to one critical element hogging your attention. 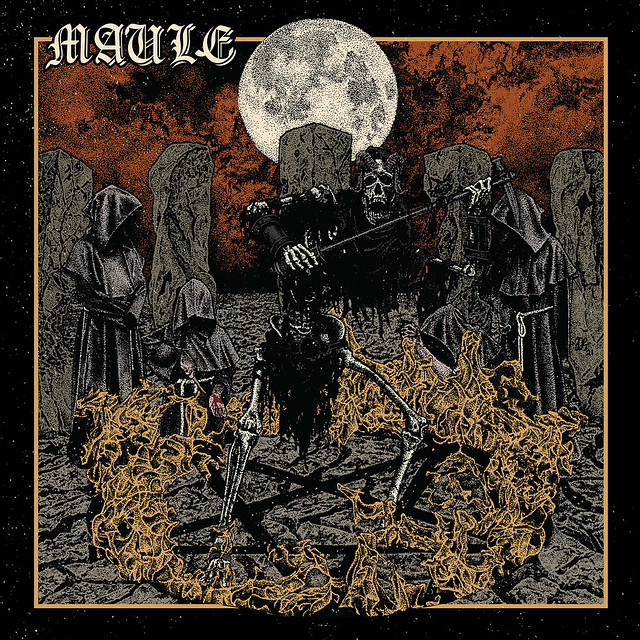 If I may say, the bass here is perfect for the kind of metal Maule are reaching for. Their performance didn’t need to be massively overpowering because they’re searching for an audience that don’t mind something a little more relaxed, all the while still engaging them in fierce bouts of power that’ll bring them from the start to finish of this record. The bass here isn’t exactly doing much to stand out on its own terms against the predominant guitar work, however it’s the mundane presence it possesses that sells its impact to me. It’s there just doing what it needs to do, but since the band haven’t tried to force our attention towards the Bass it makes our realising it and appreciating it all the more worthwhile because it’s a facet we’ve discovered for ourselves and only continue to revel in the thick and audible bass lines provided. I think this will be a good NWOBHM album of modern times not merely because the band are never begging for your attention or hoping to use past records of classic status as a crutch or an emulation; Maule clearly have their own identity and by enabling the audience to just sit back and listen they guarantee people will come back for more. If fans will discover something of their own volition once, they can do it again on a repeated listen.

We mentioned beforehand how the production and mixing efforts have resulted in an album that feels especially crisp, where there is little chance of anything getting lost within because of how defined the band’s sound is. But I feel the vocals have received an after effect of this approach, on the whole the vocals are this pretty conventional mid-range delivery that you’ve likely heard many times over from modern speed metal bands. Yet in spite of what they may appear to be, they come off with surprising power. The timbre they emit is fairly light but beneath that immediate performance there’s always an underlying raspy element rearing it’s head from time to time, so while the performance is something you’ve heard before the bite and attitude they come at you with lends genuine personality to a vocal identity that’s been utilised so many times before by a myriad of bands. What gives Maule their vocal edge primarily is how the vocals don’t just go through you but stick to you, there’s just as much substance to them as there is style.

In conclusion, this was a really pleasant listen. In general Maule are not coming at you with as much vigorous force as other more extreme works of metal may do, however in regards to NWOBHM they get the aesthetic and sonic quality of their performance down just right. But I seriously appreciated how they didn’t make their record, their debut full length release, some 1980s emulation machine which can be a very easy pitfall that newer bands have a tendency to fall into. This is Maule through and through, and while you’ve likely heard this kind of style a hundred times before, Maule branch out from their contemporaries by providing songwriting and an identity that is truly themselves without feeling like they’re constantly comparing to older titans. The album has its faster and slower moments, these latter occasion especially are needed to bring us down to earth when the majority of the record is this more octane and fiery performance; even this is something many newer NWOBHM-styled bands don’t consider: slowing it down where necessary. Maule have something here that really works and it’s because they know how to regulate themselves which results in this record being the tightly controlled but crystal clear beast that it is. I’ll certainly be coming back to this and, knowing how it’s last track closes out the record, it’ll be a day of future excitement when I learn they have a new album on the horizon.