Tokyo Blade are arguably one of the longest running underdogs that emerged out from the NWOBHM (New Wave Of British Heavy Metal) during the late 70s into the early 80s, however despite never properly reaching the success garnered by Iron Maiden, Saxon etc Tokyo Blade have often stuck to their guns to release music that has long since resonated with their fans. Formed way back originally in 1979 under the name of White Diamond before altering it to Killer in 1980, then Genghis Khan in 1982, Madame Guillotine again in 1982, Genghis Khan AGAIN in 1983 before at last settling on Tokyo Blade as we refer to them today. Their debut and self-titled album was released in 1983 before it was followed up a year later by Night Of The Blade. Another EP and album would follow suit however it appears 1989’s No Remorse is where the wheels seriously fell off the band’s wagons, possibly being the resulting reason why the band broke up in 1991. A reunion was attempted in 1995 but, ended up being shortlived with two lacklustre full length releases. But in 2007, the gears were turning once again although it wouldn’t be until 2011 the band would at last release a new album. In that time however, and since 2018, the band have established a much more competent and consistent album release schedule with a new album released every two years since then. So what can Fury give us? For those uninitiated to Tokyo Blade, its also my first exposure to them as well so we’re all making this journey together. It’s a long album but my curiosity is all the greater.

It’s quite a bass-heavy performance that the band give us. I wouldn’t say it’s down to any special reason why the Bass feels so prominent throughout the record however I can certainly say it helps to reinforce what is definitely a light guitar tone. You’ll be able to easily hear the chunky basslines all through the record’s runtime, but I think it’s also to give a little more meat to the riffs. The main riff deliveries here are straightforward, there’s nothing special that’s been applied to them. It’s an old school NWOBHM-styled affair so the band aren’t exactly going to implement anything overly crushing or along those lines. This is why I feel like the bass guitar is so important, uplifting the overall background of the album so that it can seemingly stand taller than if the bass was dramatically reduced. If anything, including a bass that is so pronounced arguably helps the band by emboldening the riffs, practically outlining them whereby they’re easier to listen to and therefore their impact feels more refined and on the mark.

It’s worth mentioning again that this is quite a long album, with 15 tracks in all. It’s for that reason why I like how the band approached their songwriting when it comes to pacing. The band know you’re here for the long run, so they’ve crafted tracks that don’t try and just rush you from one to the next. Contradicting what you’d think, I would argue that albums that feel longer than they actually are try to rush themselves so had Tokyko Blade tried the same here, we’d have an album that would come across as never ending. By maintaining a pretty steady and rudimentary pace the band have ensured that while this will be an extensive journey through this record, you’ll never feel like it’s going to drag because the band have decided to take their time. Riffs are forever alongside you and you’re always able to follow where the songwriting is going. It makes a nice change of pace to acknowledge a record as quite long without it feeling like it wants to escape you. Fury is a sprint, not a race. 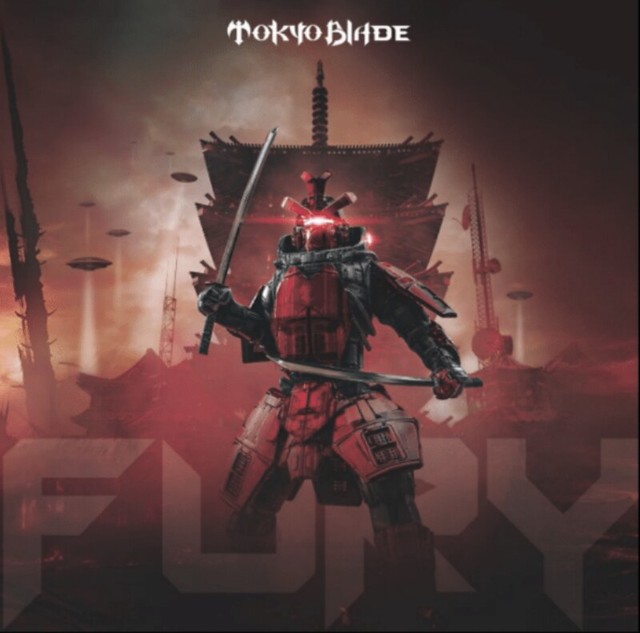 It’s been some time since I’ve been able to say this but it’s good to know that Tokyo Blade have some easy to follow lyrics. Being a NWOBHM band and all that, Tokyo Blade are naturally going to sport a vocal delivery that’s far more conventional and down to earth than other more ruthless metal acts. But I’m impressed the vocals are still as strong as they are almost 40 years on from their first released Singles, there’s no hint of struggle or aggravation going on with this delivery. It’s evident that their frontman has managed to protect and safeguard his vocal capabilities throughout the numerous decades. Naturally his voice will have faltered somewhat over the decades but the fact that they are as good and clear as they present themselves as herein is remarkable. Granted, this is no Iron Maiden or Judas Priest vocal performance however 40 years is still a very long time. Maybe because of this lessened vocal ability it’s why the band have crafted songwriting that’s much more rooted and median in pacing, regardless the vocals are easily accessible to experience and you’ll never need to strain your ears to make out what is being directed to you.

I appreciated how the drums don’t do anything remotely special. This album on the whole doesn’t do anything particularly special, it’s as old school as you would expect a long running NWOBHM to be. However I would argue that because the drums don’t stand out at all, they’re actually doing a great job here. While there isn’t anything too special to talk about with the drums, you’re forever listening and taking in what they have to give you without ever thinking what they don’t possess. There’s no point during this album where I thought that they were lacking in any capacity or weren’t living up to the rest of the band’s individual components. The boosted bass within the mix has clearly amplified the bass drums which help to give a strong impact to their thuds but I like how the band never give us any prominent double bass action; their prerogative here is to keep things simple and true to themselves. We’re not getting anything too extraneous from Tokyo Blade, however judging from the drums and riffs and vocals that was never needed.

In conclusion, Tokyo Blade could have badly messed this up by having a very long album that felt like it obtained a lot of filler. It’s actually quite satisfying therefore to note how the band have managed to conduct themselves in a way that means you can thoroughly enjoy what they offer without it feeling like you’re spending too much unnecessary time here. Listening to Fury brings to mind how an album like this would have likely sounded in 1983, there isn’t anything special or particularly modern being injected into this record. As a result, Tokyo Blade have what is actually a rather accessible and easy to experience record that fans old and new alike will be able to dive into with zero difficulty. I imagine the runtime will put some people off naturally but to the band’s credit, the songwriting here allows them to take their time and really help you to feel at home throughout this performance. You’ll never feel like you’d want one track over to reach the next but I still feel like they could have split the overall number of tracks here into two separate albums. With that said though, the band did a good job with the material they gave us and for people looking for something easier to listen to, this is guaranteed to send you away with a smile on your face. Over an hour of fun to be had within.