Album Review: Burner - A Vision Of The End
Reviewed by Dan Barnes

Cited by Metal Hammer magazine as one of the dozen bands to watch in 2022, Burner drop their debut EP through Church Road Records with a weight of expectations on their young shoulders. But, pressure makes diamonds, as the saying goes, and A Vision of the End gives the band a six-track opportunity to lay down a marker.

Youthful exuberance might have led Burner to take on the opposition head-on and try to out-muscle the competition with half a dozen slabs of intensely relentless musical bludgeoning. Instead, they seem to realise heavy works in many ways and the band are not afraid to use their seventeen minutes wisely, unveiling the many and varies arrows in their quiver.

In trying to identify a broad genre for the band’s music you would be torn somewhere between a hardcore-based-black metal with a smattering of death and grind added for the flavour. Yet to define is to restrict and the closest Burner come to definition is to imagine Converge or The Dillinger Escape Plan jamming Mayhem numbers with Terror.

The Orwellian Ingsoc opens proceedings with a heavy guitar, screaming in agony as an unrelenting musical barrage is wrung from its strings. Dissonant riffs are accompanied by a mixture of low, gruff growls and higher-pitched black metal rasps. The whirlwind execution bleeds into Nothing But War, an unstoppably hellish musical vision that isn’t shy about dropping a big breakdown and the occasional hook into the mix. 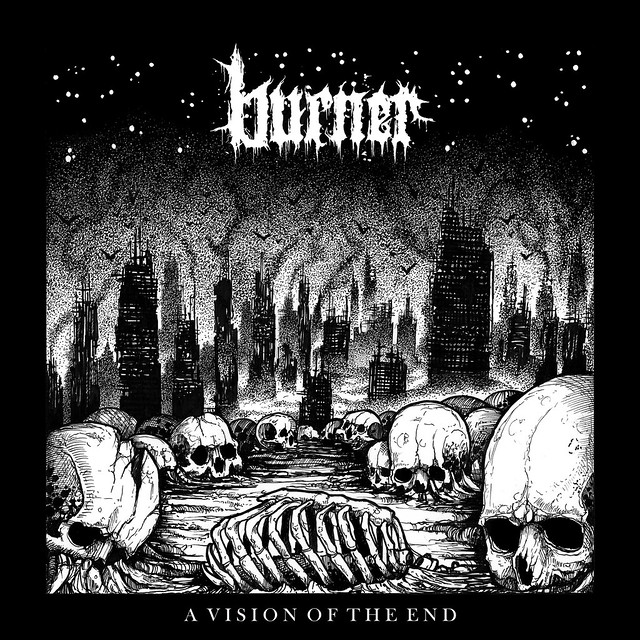 Siege Fire and Rat King Crown close out the disc in a more straightforward manner; the former being a minute of grinding while the latter is a more traditional sounding, yet no less heavy, collection of dirty black metal infused with some death metal sensibilities.

Central to A Vision of the End are the two tracks that will define Burner’s creative vision. Death Worship blends upbeat, crisp guitar lines with bass runs and staccato stabs, embellished with insane fills, which never come across as throwing the kitchen sink at it. Whereas the epic title track features more wardrobe changes than Cher.

Beginning as a solid slab of hardcore-inspired death metal, full of movements between dissonant passages and more traditional sounds, this six-and-a-half-minute manifesto finds itself becoming a Prog epic at the three-minute mark, revelling in that status for a minute or so before surrendering to the chaos once more.

As debuts go, A Vision of the End is a fine flag to be planting in the already competitive soil of the UK Extreme metal scene. On the strength of this outing, Burner is the real deal and, with a label like Church Road behind them, the faith of Metal Hammer is surely well-founded.