Album Review: Hath - All That Was Promised
Reviewed by Sam Jones

Hath. A name that absolutely shot to my attention back in 2019. Or Rot And Ruin was an exquisite find, one of the strongest debut albums I’d ever heard. Now, three years down the line, we await the momentous day where Hath finally unleash their sophomore album release titled All That Was Promised. Writing music about enduring change and the promises kept to us through life which may be broken, Hath demonstrate they’re looking to offer something more cerebral and inward than their contemporaries may be prepared to try. Formed in New Jersey, United States back in 2014, Hath was originally a three-piece when their 2015 debut EP Hive rolled around. But come 2019 and their sensational first full length and the band had expanded their roster to be a four-piece; its this exact same lineup that gave us Of Rot And Ruin that return once again to All That Was Promised, so anyone who loved that first record may already feel the hype brewing once again. The moment I saw this album announced I knew I had to grab it for a review, I couldn’t let Hath’s second album go unanswered. That’s where we are today. This is All That Was Promised.

I love the sonic dynamic this album sports right from the beginning. The chemistry the band emit in studio is well reflected in the mix as well, wherefore they have this rather tight knit understanding and dedication to one another. On record that’s conveyed through songwriting and an album sound that doesn’t just fit together like pieces of a puzzle where we feel the completed picture that is the album. Instead the band give us something downright orchestral and epic where the riffs blend with the drums that blend with the vocal delivery. Sometimes this can be a drawback for the band in question are unable to differentiate between one element and another. However, Hath have crafted something that manages to bolster each part of their instrumental and vocal components all the while fusing them together into a sound that can’t be easily deciphered in individual terms. That’s no small feat, we’re constantly listening to something that is much bigger than us and Hath do this right from the first track onwards.

I think what helps the band in this respect is how it’s been produced and mixed together. When you’re experiencing this record you’re getting the full onslaught of what their songwriting is able to dish out, and yet it’s never presented as so compacted and distilled as what many conventional death metal acts would otherwise choose to offer us. The fist isn’t as clenched here, the sound they emit is given the space to move around in but only just enough more so try at it doesn’t feel like their music is escaping us. Listening to All That Was Promised is reminiscent to watching this album be performed at a live gig but under studio recording criteria. The riffs aren’t as tonally crushing as other riffs you may find, but due to how the mix has been handled, those lingering riffs hold so much weight and impact that it’s impossible not to pay attention. The guitar work crashes with such cacophonous reverie and yet soloing herein harnesses such crystal clear playing. This necessary juxtaposition between primary riffs and soloing allows for us to appreciate, in greater breadth, the two different guitar tones of clarity. Instrumentally speaking, it’s a massive sounding record without needing to try. 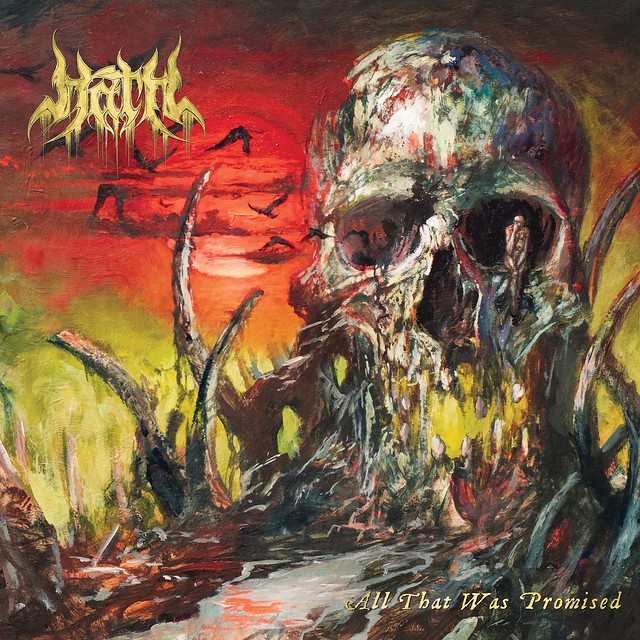 The vocals are yet another triumph. When I first heard their debut record, I was absolutely blown away by the vocal dynamic this band champions. Granted, you’ve heard something like it before but the way the vocals twist and change practically depending on what the songwriting requires is something unique. If I may say so, we’re not used to vocals being an active and flowing element of a band’s songwriting yet, that is certainly the case here. The vocals have this bellowing and forceful projection that makes them irresistible to turn away from and what’s more, they aren’t this burden to carry. If anything, they’re a weight you want to hold onto your shoulders, it’s a joy to feel the vocals raise themselves into these grander, near operatic performances as they’re always followed in conjunction with the band’s signature, more grandiose riff pieces that have become a staple icon of the band’s identity. The vocals amplify the riffs as much as the reverse is equally true; Hath have effectively established a chemistry that works like a convection current, where one thing falls another soon rises and we can feel this flowing all through the album.

The drums are another consequence of the band’s choice of mix too. Considering the band play at faster paces for the majority of the album it comes to no surprise that we receive so many blast beats. However, the multitude of blast beats here does nothing to quench our desire to hear blistering devastation from the drums; the Tom-Tom strikes are exquisitely enhanced so we feel each impact that follows suit and what’s more, the clarity that the drums have been given thanks to the band’s instrumental dynamic has resulted in a momentum that is never given the opportunity to die down even when the intensity lessens. The odd inclusion of gravity blasts and a cleverly positioned bass drumming within the mix also enables us to pick on more than is immediately in our faces without the drums feeling overcrowded. We’re treated to the right amount of obliteration.

What gives this album its additional power is how its duration doesn’t just feel like it’s moving from track to track. Each song you find here feels like a miniature journey from beginning to end, not merely of the full album but of the individual tracks also. Experiencing each song feels like a joy because you momentarily forget you’re listening to another song, and you slowly embrace the methodical yet organic nature that is the respective track’s structure. You forget that there’s a band playing, and simply tune in to what the music is giving you. You feel all the highs and lows, the avenues and meanderings the songwriting takes you and just bask effortlessly into this churning maelstrom the band present to you, yet it’s something coherent. You’re never at risk of drowning in the band’s scope or songwriting, strictly speaking the band continuously prop your head just above the water so you’re never overwhelmed by what you’re feeling but can thoroughly feel the full force of what they’re bringing unto you.

In conclusion, this is without a doubt a very strong album. To me, All That Was Promised feels like Hath distilled the best aspects of Of Rot And Ruin (which in itself was an exemplary record), took their songwriting that extra step further into complexity and intensity, and then crafted what we’ve got here. This is a shining example of how a band can move forward and hone their craft without making their previous releases lesser through hindsight. All That Was Promised feels like a natural evolution for what Hath can offer us and in places here and there, they excel beyond even what their grandest pieces of their debut record gave us. An extraordinary album that leaves us consistently excited for the next upcoming song because of the individual journey we’re taken on through each ensuing track. Powerful yet coherent. Grandiose yet intimate. Intense yet digestible. Hath have outdone themselves truly once more. If they keep this up, they’ll seriously make a name for themselves.