Album Review: Knight And Gallow - For Honor And Bloodshed
Reviewed by Jon Wigg

The ever expanding Epic Metal market is rapidly becoming a difficult one to break into. The scene has seen new bands storming through like Visigoth and Eternal Champion while some of the founders, notably Cirith Ungol and Fates Warning have also made returns with great new material. So how does a new group of youngsters make an impact? Well by making an album as fun as ‘For Honor and Bloodshed’.

Knight and Gallow from Sacramento, California only formed in 2019 and while it often sounds like this is the case, their skill especially in songwriting is clear. A collection of 9 tracks, which hit way more often than they miss, is brought together for their debut and it is full of catchy riffs, soaring solos and stories of yore.

Thematically there is a lot of what you would expect - Lord of the Rings, drinking the blood of enemies, and even a song about the  final boss in Dark Souls 3 - and the lyrics are well crafted and carry the listener on a journey. Musically there is quite a bit of variation. The straight up epic metal tracks are there, but there is quite a modern sound alongside this especially with some almost punk chord progressions (while still sounding metal).

On first listen, the part I wasn’t sure about was the vocals. The instrumental production is bang on but to me the vocal level seems a little low and can get drowned out. Nick Chambers’ also, while a fine singer, has a bit of developing to do to get his vocals to stand up against the monster riffing going on behind him. There are also a few moments during solos where a note here and there just seemed to miss its desired target, causing some wincing, but again this is a debut so I’m not to worry about this. Song-wise the only one that didn’t particularly resonate with me was ‘Godless’. It isn’t helped with its position between 2 of the best tracks on the album, and there is nothing wrong with it, but it feels quite repetitive, really only having one main riff. 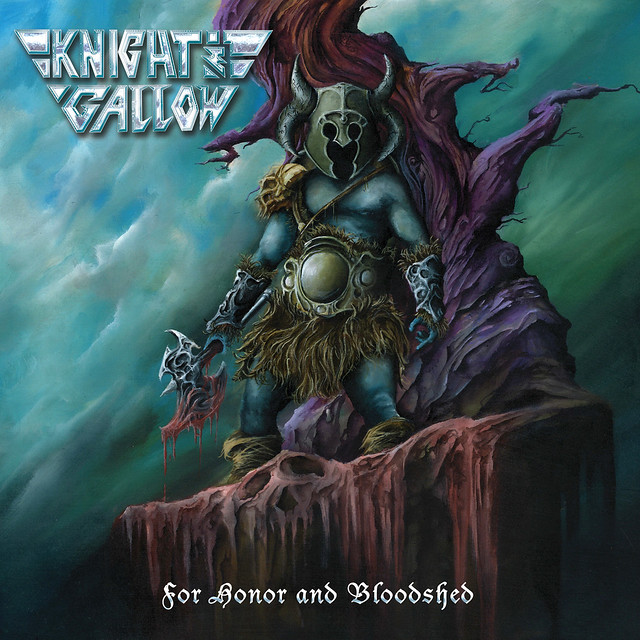 Right, that’s enough of the negative - on to the good stuff. Well, the rest! When you listen to epic metal, you want to feel empowered, like you could take on a horde of orcs single-handed, and most importantly, to have fun. And ‘For Honor and Bloodshed’ delivers in spades.

‘Middle Earth’ provides a fairly standard instrumental opening for the amazing ‘Men Of The West’. Rarely over the last few years has a song made me smile so much on first listen. Sure it’s a bit ragged around the edges, but this is almost 8 minutes of pure, over the top fun. Changes in pace, a catchy chorus and a batshit crazy 2 minute solo section make this probably my favourite track of the year so far in any genre.

‘Soul of Cinder’ is another great sing-along anthem which is likely to become a live favourite and ‘Lord of the Sword’ is very traditional in its format and sound. ‘God’s Will’ changes things up a bit and adds in some more modern methods. It trips along really well with a cracking riff and Chambers channels his inner King Diamond, switching between high and low vocals in the same verse. Initially I wasn’t keen but with repeat listens, this has become one of my favoured songs on the album.

‘Stormbringer’s Call’ delivers the punk chord progression alongside the best vocal performance here, and is followed by the anthem ‘Blood Of Wolves’ which ups the pace and the need to march.

The album closes, as all epic metal albums should, with an epic tale in ‘Black Swordsman’. Heavy, beautifully crafted and paced, mixing slow stompy parts with a little bit of thrash and an acoustic finish, this is a great way to close.

Overall, there are so many great moments on this album from Knight and Gallow that it is often easy to forget how young the band are, and that this is their debut. Every now and then, there is a dodgy note or chord which reminds you, but these guys have the potential to become one of the leaders in the epic metal genre and beyond. What a start - crazy, powerful and well, epic