‘Host of Desecration’ is the debut album from Sleepless, a progressive traditional metal trio from Portland which features former members of death metallers Dead Conspiracy. It’s a solid 37 minutes which opens with the robust ‘The King Who’s Not There’, a track that conjures up comparisons with Nevermore, Anacrusis, Fates Warning and Sanctuary for starters. It moves very much in the same vein throughout and it’s an enjoyable listen if a little patchy in places.

Vocalist Kevin Hahn’s singing is very much in the classic metal style, and if you are a fan of bands who deliver heavy metal with a crunch then you should take a listen. His delivery is clean and crisp, full of power and drawing comparisons with a wide range of top metal singers. There is plenty of early riffing, anthemic posturing and macho tempos that demand fist pumping, head banging and general metal frivolity. Hahn is also no slouch on guitar, his slicing lead work firing out solos like bullets, whilst the rhythm is nailed down by guitarist and founder Eric Sexton-Dorsett, who also adds the bass work on the album. The line up is completed by the reliable and Eric Detablan on drums who provides a concrete platform.

It’s not all studs and leather though. ‘There’s Something in the Fog’ throws in some Watchtower like time changes and variation, unpredictable and unconventional. The title track utilises some subtle synths that add a layer underneath a punishingly heavy riff. It’s a dark and doomy song, which takes some bizarre and random twists and turns. After the more traditional opening songs, there’s a fair amount of the unexpected hitting you. This might not be as traditional as initially expected. 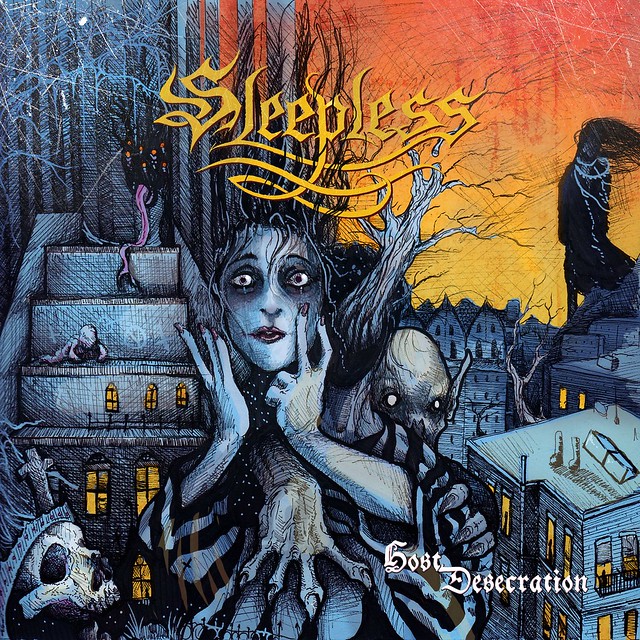 At times the music moves to epic levels, bombastic and dramatic. The duo of ‘Diviner of Truth’ and ‘Blood Libel (A Vampire Tale)’ both slot easily into this category, with the songs creating horror and imagery whilst the tempo, drumming and overall playing borders thrash at times. It’s an intriguing approach for whilst there are elements of conventional metal, much of the style sits with more extreme and technically challenging bands. It’s a contrast that works well, albeit on occasion a little overdone. Whilst you are screaming for a straight-ahead banger, such as penultimate thrasher ‘Mushroom Clouds at Night’, Sleepless routinely divert and change their entire direction, whipping around in front of you before flipping back over and causing you to change aspects once more.

It all comes to a huge crescendo on what can only be described as a magnificent finale – ‘The Man Who Could Not Sleep’ standing head and shoulders above everything else in six glorious minutes of progressive and doom drenched metal. It’s worth the other 31 minutes just to get to this point. And that’s not to downplay a very decent release overall, but ‘The Man Who Could Not Sleep’ is an intoxicating and heady mix of styles that feels like an old friend as well as new acquaintance.

Host of Desecration is an album of contrasts, changes, and unpredictability. It’s fresh and contemporary with an old school feel and well worth 40 minutes of your time.