This was a deeply anticipated album. Artificial Brain exploded onto the scene with their 2014 debut album Labyrinth Constellation, an album that utterly tore my mind open with its scintillating degrees of technical brutality. Formed in 2011 from Long Island, New York, United States, Artificial Brain got off to a storming beginning with not only a Single, but their first Demo within the same year. Butchering Cosmic Giants, their first EP as of 2013, brought more people to their side but it was that aforementioned full length release in 2014 that absolutely detonated the hinges off any doors barring them from the wider metal community. Since then, the band have only gone from strength to strength especially since releasing their sophomore album titled Infrared Horizon, in 2017, which only appeared to cement the band’s sci-fi, technical brutality. But another five years pass, and we finally get a new album and a self-titled work no less. I instantly knew I wanted to review this once I saw this record announced so let’s waste no time in working out what the band have given us after their longest gap yet between releases.

When it comes to the vocals, they come off with a uniquely melancholy tone this time round; this is of course Will Smith’s last vocal credit with the band before he will depart the band on grounds of personal reasons. Judging by what he’s able to impart here, it’ll be tough replacing him; his hyper deep guttural vocals have become such an integral element to Artificial Brain’s identity. As per their prior two records, there’s zero chance of making out a single syllable of what he’s saying so it’s best to view his vocals more as an atmospheric ploy to bind us within the record’s soundscape. Yet it isn’t merely the fact that he can bring his vocals to extreme depths, it’s the way he can twist and reshape his utterances because we’ve heard vocalists pull off super deep performances before, yet Smith manages to provide just a smidgen of pig squeal into his delivery to give the band their warped and dissonant sound. It’s a brutal death metal vocal performance that just hints out the more extreme vocal choices.

When it comes to guitar work, this may be Artificial Brain’s most important element since their sound has become so integral in who they are and how they’re perceived. Most bands would be more than happy to unleash slab after slab of crushingly heavy riffs downtuned to hell, yet Artificial Brain brilliantly use a much lighter and clear form of guitar tone. As a result, the riffs can always be picked up on even as the vocals are going to town on the crushing depths. In addition, the band’s warped guitar tone also possesses evident technical prowess which doesn’t come across like they’re shoving it in your face. On their third album now, it’s simply a part of the band’s identity. There’s no technical arrogance going on here, it’s a natural aspect of their songwriting which, I think, is why the band have garnered such a cult following so quickly. That lighter guitar tone also lacks neither power nor drive as while they’re playing fast as you’d wish them to do, their riffs capture this dissonant element which other bands never even begin to touch upon. It’s sci-fi metal if it was turned inside out and then chose to devour itself. 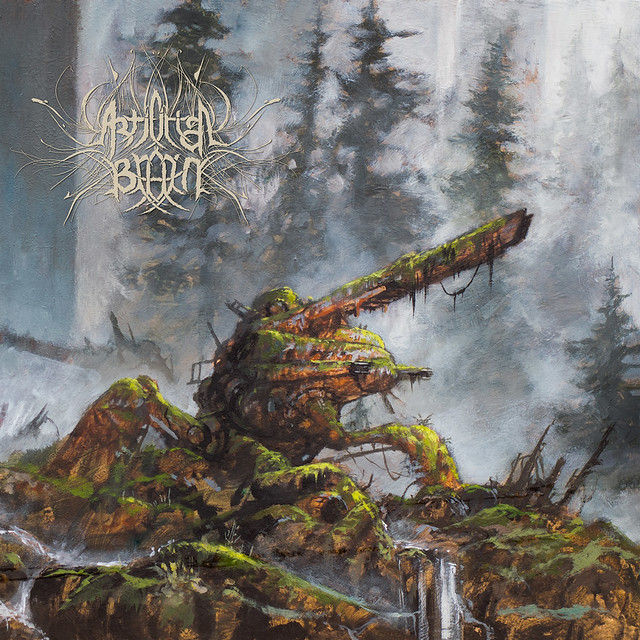 It still amazes me how, after all these years, Artificial Brain can still whip out some technical ability that blows my mind without being technically in your face about their ability to perform. While the songwriting is predominantly typical of a death metal record, it’s during those main verses and choruses that the band’s technical capacity truly shines. The fact that they’ve managed to carve out their own small niche amongst a plethora of technically gifted bands, and then outshine them, is a testament to their uncanny ability to write riffs and instrumental segments that continuously raise your eyebrows as you’re listening. It’s this maddening fusion of crushing power and dissonance in distance that lend the band such a signature sound. You know immediately when these guys are playing, and better yet their technical ability is often situated further aback within the record’s mix. So, when the band’s dissonant technicality is on show it really drags you in because the band give you, the listener, the freedom to appreciate what you’d like as opposed to being dictated where your attention should be focused. It gives the band, and this record, an allure of legitimate discovery that may wildly differ to other people’s experiences.

I’m glad that the drums are here and in the attack they unleash on us. Considering how ethereal and strange the band’s technical ability can be, it’s reassuring to recognise the grounding influence the drums have on this record. The vocals are hyper low in their guttural nature but for someone else they may be a touch intangible, that’s why the drums feel so important to the record as a whole; they help to anchor the record down to earth so we aren’t at risk at flying completely away or merely floating above the album. The bass drums are capable at providing the rolling power needed to link yourself to the record, and the way the drums sometimes approach gravity blasts help to ensure there’s always more than the technical riffs happening in the background, so whether it’s at the back or front of the record’s mix the drums are always engaging our attention. In addition, the technical capacity extends to the drumming too where there’s often some small nicety thrown in for good measure to elevate the drum tracks into more avant-grade territory.

In conclusion, Artificial Brain’s self-titled record is, in a way, a swansong and an end of an era for the band. Considering how this is vocalist Will Smith’s last credit working with Artificial Brain, his final vocal performance throughout the track “The Last Words Of The Wobbling Sun” really bring to mind that Smith is the Wobbling Sun in this instance, as we wonder where the band will go from here. Replacing Smith won’t be an easy feat as his vocals have become such an incremental aspect of their sound, but I am confident they shall pull through. Atmospherically and aesthetically it’s the Artificial Brain we’ve come to recognise and if anything, their technical capability is on show clearer than it’s ever been. Yet despite its brutality, it’s a surprisingly easy album to enjoy and it’s a 45 minute opus that will leave you gasping for more as you effortlessly decide to smash that replay button. Artificial Brain’s 3rd album is a farewell to one era but, with hope, the beginning of something new.