Kreator are an institution as much as they are a band. German thrash metal innovators who have released some of the finest albums in the thrash metal genre and still to this day one of the finest thrash bands in the world with a career spanning nearly 40 years. Hate Über Alles is the fifteenth full length album from the band and one that shows the Kreator have are showing no signs of taking their feet off the pedal.

Hate Über Alles is Kreator continuing the momentum they built with previous albums Phantom Antichrist and Gods Of Violence mixing their ferocious teutonic thrash with modern production techniques, catchy songwriting and a melodic ear. Hate Über Alles steps up the melody in the bands sound with nods to traditional heavy metal and even power metal at times in the musical DNA of the album but this isn’t Kreator going soft as the thrashing intensity is still very present but it is a case of melody and extremity working in tandem and complimenting each other rather than working against each other. The title track and Killer Of Jesus are a blinding opening statement showcasing the band's knack of blistering thrash with hooks and melodies whilst Strongest Of The Strong is Kreator on pure anthemic form. 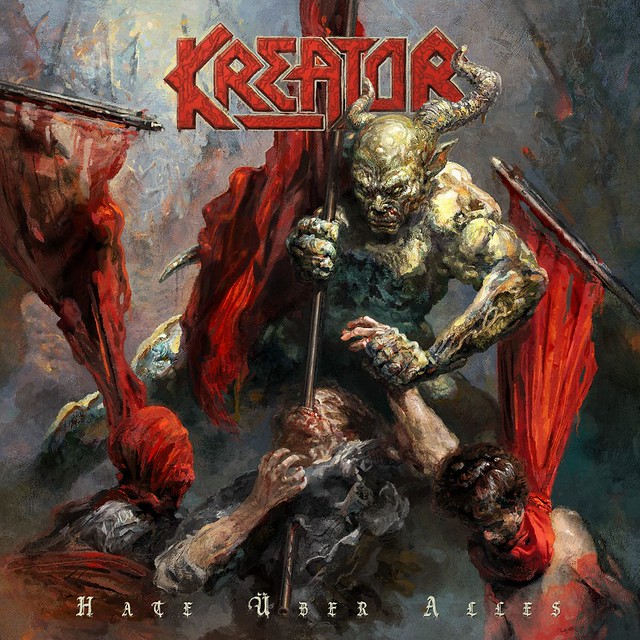 The melodic elements come to the fore in the trio of Become Immortal, Conquer And Destroy and Midnight Sun. Become Immortal is heavily indebted to traditional metal with a very NWOBHM riff and epic woah-oh-oh vocals which have come straight from the power metal rulebook. Conquer And Destroy is a furious thrasher before a massive injection of melody in its second half with the inclusion of some clean vocals whilst Midnight Sun incorporates some guest clean vocals from German new wave singer Sofia Portanet. It’s Kreator dabbling in less extreme sounds but doing it in their own style.

The band sound as impassioned and furious as ever. Even though the album was written and ready before the pandemic hit, the frustrations of the past two years have been poured into these recordings with the band stating that they took all of that emotion and put it into the final versions of these songs. Original members Mille Petrozza (vocals and guitars) and Ventor (drums) are the beating core of Kreator with long term guitarist Sami Yli-Sirniö making his sixth appearance on a Kreator album. The new blood of the band is bassist Frédéric Leclercq (Sinsaenum, ex-DragonForce) who joined Kreator in 2019 but makes his recording debut here.