Yatra are an exciting band. When I first came across them on their 2020 All Is Lost record, I was instantly blown away by the ruthless nature of the band’s sound that didn’t come across as overzealously portrayed. Formed in Maryland, United States in 2017 originally as Blood Raven, the band soon changed their name to Yatra, and before long the band were churning out records faster than fans could consume them. This is especially prevalent in 2020 where, following the release of their debut album Death Ritual in 2019, they released not one but two studio albums within the same year. It goes to show that Yatra are keen on becoming something to be reckoned and so, after two years, the band have returned with what is surely to be another slab of harsh, extreme metal to rip our scalps off with. I was very excited to see this record, considering my positive response to All Is Lost a few years back, so let’s get this record underway.

It’s rare to come across an extreme metal vocal delivery, on an album that’s as fierce as what Yatra can demonstrate, that can be as easily followed as their frontman is herein. What’s more impressive is the amount of snarl and twists that he puts into his vocal performance, and still he manages to make himself not merely audible but genuinely easy to follow. Hearing the vocals and understanding what he says is a hugely underrated concept in extreme metal, as it enables the audience to fall all the more deeply into the band’s sound. We’re able to get a better idea of what the band are about and what their subject matter is revolving around. Being able to accentuate your syllables rather well within that swirling maelstrom of snarl and bile is no easy accomplishment.

It can’t be overstated just how powerful the guitar work here feels. The band are playing at speed and a pace that definitely brings you along for the ride, but the riffs themselves never seem to pick up all too quickly throughout the record. The band are eager to keep their riffs at a respectable speed whereby their audience can follow them along without difficulty. What this crafts as a result, is an album that gives us all the sensations of speed whilst still doubling down on the songwriting’s intensity. If we compare this album to their previous releases, there’s a notable difference. Yatra have certainly amplified the brutality they infer with their songwriting, many of the stoner and sludge elements are gone, death metal having filled the void where once those aspects stood. But I believe the sludge element is still noticeable when the riffs are underway, considering how the band maintain a steady approach to their riff pacing enabling us to not only hear but feel the vile nature of their sound. 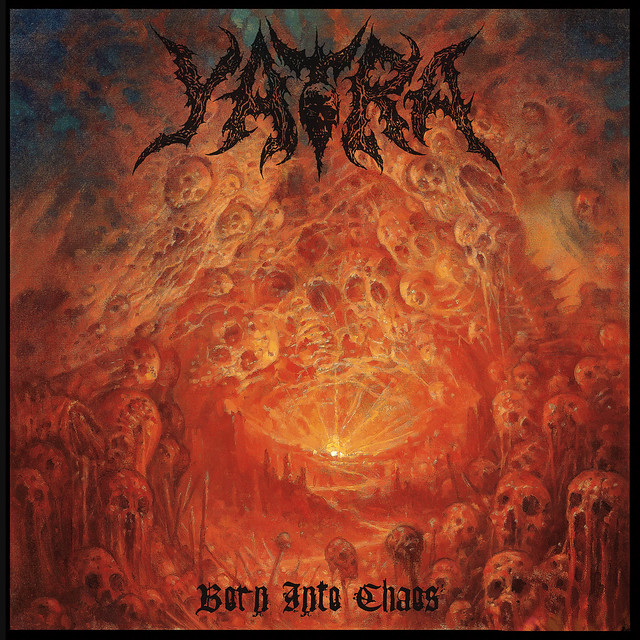 However, it must be stated how far forward in the mix the riffs come across as. When this album plays, it’s immediately apparent what the band wished to be viewed as the priority of their sound. The guitar work is so forward in our face we may as well be scraping our faces across the fretboard. From one perspective it allows the band to really instil their form of sludgened death metal into us, creating a vast soundscape for us to be enveloped by which is only bolstered by how thick and encompassing these riffs are. But on the other hand, they definitely dominate to a point where not much else is emphasised; the vocals are powerful and snarling but due to a low volume in the mix they don’t come across with as much bile as they really should. Nor do the drums feel fully realised aside from the bass drums that manage to, when rolled out, provide a more thunderous depth to the album’s foundations. It’s a two-fold thing; the production and mixing has hampered as well as amplified the record for us on the whole.

I especially enjoyed how the band were able to periodically change up their pace from time to time. For the most part, their songwriting consists of that steadier and pounding approach which allows us to follow them more closely, we therefore never lose sight of where we are and forever know where we are going. But sometimes the band will change things up; the inclusion of crashing blast beats, more noticeable drum tracks that are faster and more furious, riffs much slower yet more vicious than the kind we usually receive. These instances aren’t always the norm with this record but it’s because of that rarity within their songwriting that renders them so worthwhile and noticeable. Due to the open nature of their sound, where it hasn’t been walled in, the blast beats come off with this massive, tinny timbre that truly gives the impression of organised chaos. It feels at times like this record is barely holding itself together, as if it were ripping itself apart at the seams.

In conclusion, while this record does have its inherent flaws, it still manages to be everything you would want Yatra to provide you with. The band’s doubling down on the death metal side of things has really helped them towards bringing a dirtier and more savage quality to their songwriting that I think has always been present. Their previous studio output has always exemplified the nastier element of sludge metal but, by infusing their sound with that more ferocious element the band have taken their sound to new and more ruthless heights. I believe a few kinks need ironing out here and there where the mixing is concerned but, on the whole, this is precisely what Yatra have been vying for I’d wager. In a way we view this record as a test drive for their newer, destructive sound and hopefully a future release will see the band come all the closer to truly realising what they started with here. Yatra are a growing force in my mind and whenever I see a new release by these guys, I am instantly coerced into seeing what these guys may deliver.