Album Review: American Terror - Where We Are
Reviewed by Dan Barnes

Coming just two years after their Influencer debut, Georgia four-piece, American Terror, bravely tackle the thorny subject of the state of their country on their latest release, Where We Are. To the bands’ credit, their observation is critical of both sides of the increasing polarised divide and, with the current state of the world being somewhat thin-skinned, Where We Are is guaranteed to irk as much as it enthrals.

Still, Punk was never meant to be easy listening and recapturing the abrasive attitude and social commentary of the genre seems more relevant today than at any time since the movement’s hey-days.

Kicking off with the aptly titled State of the Union, American Terror set out their stall with blaring sirens and a collage of soundbites from the past couple of years, overlayed against a backdrop of an urban beat and chilling in its verbiage; more so when you think back to the continued context of those utterances.

Beginning proper with End of America, both the first single from the record and the first song written by singer Brad Cox during these sessions. Opening with a pop-punk chorus before morphing into a more vicious version of punk for the verses. Add a sprinkle of the urban to the mix and Where We Are begins as it means to go one. 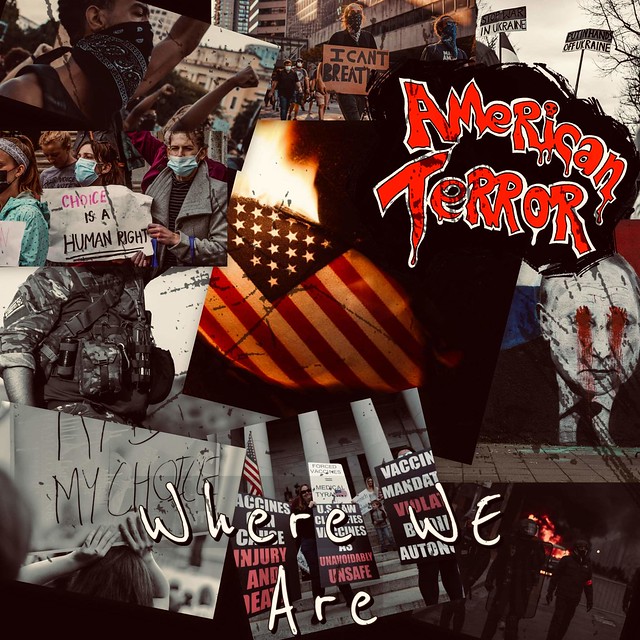 Representing the nature of the debate, American Terror diversify their sound throughout the half-hour run-time. N.L.M. – or No Lives Matter – is built around an intensely bouncing riff and more than a little Nu Metal style; while The System sees itself raging against the US machine, incorporating some early nineties vibes to accompany the scathing lyrical content.

The Urban influences come more to the fore on Souless and the funked-up Just a Victim, with the self-determinatively titled, I’m Fucked, blending a melancholically gothic passage into the track.

The most unexpected turn comes in the form of Self Control and Take Out a Bully and, although foreshadowed in End of America, both songs are forged in the image of Marilyn Manson at his industrial peak. Cox’s vocals track Manson phrasing to a tee as the band deliver those tightly-sloppy sleazy riffs.

Such is the intent of Where We Are that the promise of a Punk record is only really realised on Attitude, with its snappy riffs and deep bass lines. Elsewhere, the album revels in the many influences that brought about its creation, sitting somewhere between Punk and Metal, yet finding new musical paths to tread throughout

If I may be permitted to paraphrase the media blurb, American Terror have indeed made an album filled with piss and vinegar on the foundation of many inconvenient truths, ready to offend woke society and the abomination that is cancel culture.

Pro-Pain insisted the truth hurts but that does not mean it shouldn’t be spoken; American Terror have stuck their collective heads above the parapet and spoken truth to power, regardless of the repercussions. And how much more Punk could you get?