Max Cavalera is now rightly known as an icon in the music we love, his legacy needs no explanation to the readers of this publication, and if you have any knowledge of Soulfly you will be expecting a certain kind of aggressive music, blended with tribal beats, lyrics of violence, and heavy hard riffs.

The opening number from 'Totem' hits you hard with the riffs and distinctive vocals from the outset. 'Superstition’ certainly leaves you in no doubt who you are listening to. Max’s riffs are as bad ass as you hoped for and the speed and tone is fast and powerful as what we may expect. This opening number certainly sets out the Soufly stall. It’s brief and sharp, as is the second track 'Scouring The Vile'. Marc Rizzo is no longer with the band but the fast little guitar licks are still prevalent in the music, and the familiar vocal talents of John Tardy appear here too. The addition of his voice works well and complements Max’s voice. He is used to sharing the mic these days due to his other musical projects such as Killer Be Killed and his music only benefits from this.

'Filth Upon Filth' contains a riff sure to throw heads around in a live setting, and continues the short but powerful track theme. 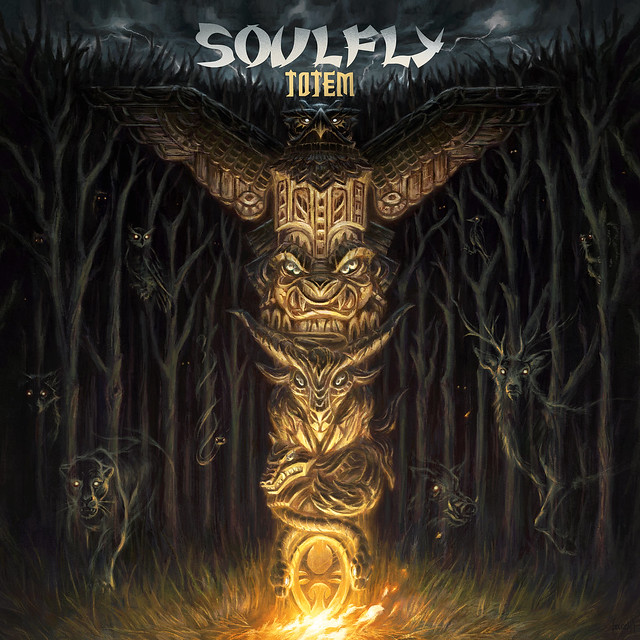 The album is produced by Cavalera alongside Arthur Risk and sounds thick and layered. All the menace and beef in blackened thrash are captured well. 'Rot In Pain' (a song name that has to be exclaimed very quickly) has a very slight hard-core element with its tone and ferocious drumming from Zyon Cavalera, which is demonstrated here and throughout 'Totem's length.

The tempo slows slightly with 'Damage Done' but the hostile tone does not. Frantic guitar solos pepper this song as it gradually comes up to speed which then halts to a white noise buzz. The title track is a little longer than previous tracks and has more textures contained in it. The aggression is soon joined by speed presently followed by a nasty catchy breakdown that still contains Cavalera aggression.

'Ancestors' is once again raw and high in its octane. Again adopting the slower route to get its point over. And when I mention slower I don’t mean 'Crowbar' slow, just a little slower and less frantic than some other tracks. The razor riffs soon return in 'Ecstasy of Gold' before we are then met with the confusing sound of the song 'Soulfly XII'. We are all accustomed to Max’s penchant to throwing us a curve ball once in a while, and he has not strayed from the path.

On the final track 'Spirit Animal' we are joined by Chris Ulsh (Powertrip) and Richie Cavalera, Max’s step-son. This song begins with an epic tone and contains a kind of black metal chanting adding another level of metal to this album. Richie’s vocals are an excellent addition here and this track tops off a really really good Soulfly album. One of the best I have encountered for a while.