The International collection of musicians from Hong Kong, Switzerland, the U.K. and the States, Awaken The Misogynist first appeared back in 2020 with the release of their debut EP Abuse of Consumption which was originally was released digitally before Rotten Music released a cd version at a later date. Now the 5 piece have reared their collective heads again and now teamed up with the power house label Comatose Music for their debut full length Descended from Vast Dimensions.

Following one of the best intro tracks I’ve heard in a while, Descended From Vast Dimensions gets right to work in delivering a good old slab of wretched bludgeoning death metal. The first thing that instantly strikes me is just how fuller the sound is on this record compared to the EP, it has a massive thick sound that absolutely crushes as the meaty riffs melt between savage shredding, massive slams and the occasional pinch harmonic thrown in for good measure. Vocally you are hit with a duel attack Livio and Jameson both offer disgusting slabs of audio guttural filth. 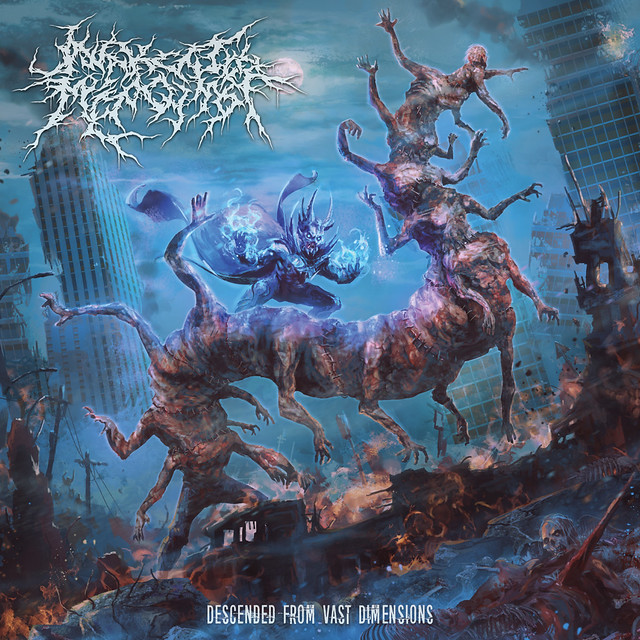 The low end brought by Joe of Crepitation and Colpoclesis really adds that depth giving those brutal riffs added punch as they rip and tear through your ears. With any death metal record that focuses on the slamming side of style you need grooves and Descended From Vast Dimensions brings those grooves. They are slick, heavy and most importantly do not fall into the wormhole of so many similar bands by being utterly monotonous, they are executed appropriately to ensure maximum effectiveness when the band lets them rip.

Awaken the Misogynist delivers a massive full sounding slab of brutal death metal. It’s not going to win points for originality but it’s a collection of great songs, and will certainly hit the spot with brutal death metal fans.