When it comes to an absolutely relentless and barbaric take on black metal then Nordjevel should be everyone’s go to band. Ever since the bands formation in Norway in 2015, Nordjevel has been a sonic force to be reckoned with taking black metal to extreme levels of savagery and brutality. Now with their third album Gnavhòl, Nordjevel show they have no plans on slowing down and taking it easy as this album is one caustic hellhole of blackened fury.

Gnavhòl absolutely takes no prisoners from start to finish with ten songs of absolute bludgeoning fury from the opening barrage of I Djevelans Skygge and Of Rats And Men to later cuts such as Antichrist Flesh and Gnawing The Bones (which also appeared on last years Fenriir E.P.). These are songs that should have any self-respecting extreme metal fans salivating as they mix evil, violent and disgusting riffs with that signature tremolo black metal sound with an absolutely relentless rhythm section and drum attack. The speed and aggression of these songs is astonishing with the riffing being absolutely relentless underpinned with some dark melodic undertones whilst the drumming from Dominator is off the scale with the power, speed and precision of the blast-beats and double-kick destroying everything in their path. 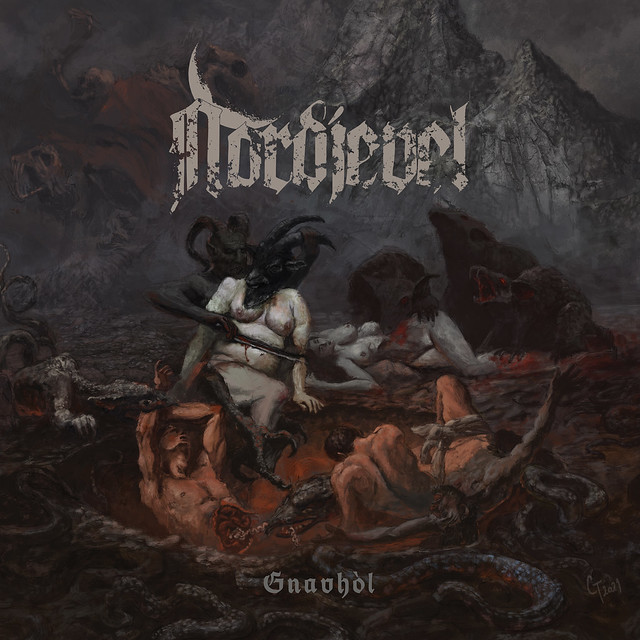 The album rarely pauses for breath apart from a couple of slightly slower-paced yet no less brutal songs in the form of the title track and the epic and lengthy Endritual. The intro to Spores Of Gnosis is deceptively calm before the violence and carnage erupts forth and spews out of your speakers and proves to be one of the most effective songs on the album.

Nordjevel maintain the momentum they have built on their previous releases and Gnavhòl is another fantastic album to add to their small but very impressive discography. This is black metal that is wholly dark and evil but sonically devastating with the levels of violence and aggression in the music. As a fan of dark and violent music this release ticked lots of boxes for me and is another on a growing list of very impressive black metal albums released in 2022. Nordjevel have a very straightforward approach to black metal with the approach being destroy everything in front of us but damn it is effective and wholly captivating.