Matt: My one album I would take would have to be Silence the World by Adept. It wasn’t the album that influenced me to make music, but it was the album that made me realise I wanted to make heavy music, I could still listen on repeat.

Owen: I think I’d have to go for my favourite metalcore album, in “The Place I feel Safest” by Currents. That’s an album I can always go back and listen to and have a good time, every song is a banger and it never fails to do it for me. I could be on the island for years and never get bored of it.

Ethan: It would have to be “The Way it Ends” by Currents. This album means a lot to me and would sooth any anxiety I felt whilst marooned.

TJ: I’d have to say “Singularity” by Northlane. It’s an absolute masterpiece from start to finish and always gets me through a rough day. Much like being stranded on an island.

Tom: Limp Bizkit – Significant Other. It was the very first album I bought and has some good hunting tracks for when I have to bare knuckle fight a tiger.

Matt: For me it would probably be Endgame by Rise Against, it was my favourite album as a teenager and the album cover always reminds me of good times.

Owen: Honestly, the artwork from Balls Out by Steel Panther might be a good shout. Considering I’m stranded on this island with four other dudes for God knows how long, it would be a nice change of scenery. I reckon all the guys would probably be thanking me for my choice too.

Ethan: The Place I Feel Safest by Currents as it’s detailed and fun to look at.

TJ: This is a tough one. I’ll say Bullet For My Valentines “Fever” poster. Crabs and boobies is kinda my thing.

Tom: Iron Maiden – Fear of the Dark. It’s just such a cool piece of art work, I never get tired of seeing it.

Owen: Happy days. Being stranded really isn’t that bad if there’s a bar. It’s going to have to be pints of Strongbow. My mates usually give me grief for my taste in cider and I’ve never understood why. Strongbow slaps and it’s always been my tipple of choice.

Ethan: The one drink I would choose for me to stay on this island would be Captain Morgan’s, seems kind of fitting.

Tom: Disaronno. I’d have to find some fresh fruit for mixer but if not then it’s not the end of the world.

Owen: I’d go for anything Wage War put out. They sell some genuinely stylish merch; all their drops are fire.

Ethan: Band merch I managed to save would be my Currents hoodie. Safe to say I really like Currents.

Tom: Anyone of my oversized Bring me the Horizon tops, they’re super comfy and I like the artwork.

Matt: Most likely the girlfriend (because she’d kill me for saying anything else), or maybe some sort of comedian like Ricky Gervais so I could stay entertained.

Owen: I reckon Karl Pilkington would be brilliant. Anything that man says is funny to me and you’re going to need some laughs in a situation like this.

Ethan: I would actually be happy to be stuck on an island with my band mates, we all get on very well and plus, I can annoy the hell out of Matt for eternity.

TJ: My dog undoubtedly. I mean, I love the boys but my lil dude Milo and I have an inseparable bond. Plus, he’s the cutest lil guy!

Tom: Georgia South from Nova Twins. That girl can rock and if looks could kill it would be an easy time hunting. 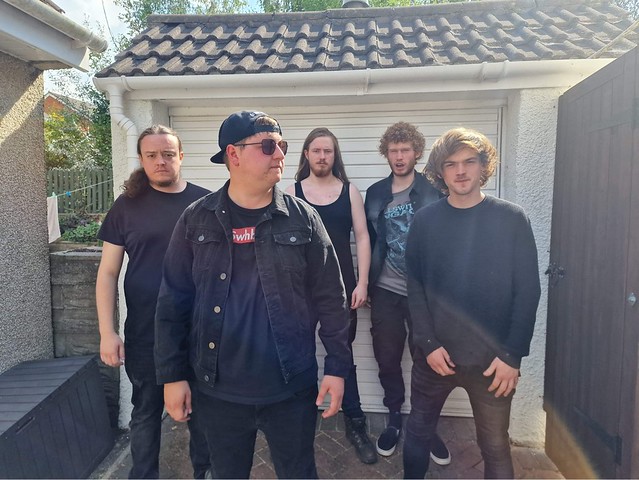 Matt: I’d probably say some sort of Enter Shikari show, they always make things entertaining. Or possibly Shinedown, they sound just as they do on the records.

Owen: It’d have to be the big 4 of Thrash, Metallica, Megadeth, Slayer and Anthrax playing Sonisphere Festival in 2011. I had that on DVD and it’s got me through so many wifi-less nights over the years.

Ethan: The live show I would play would be Killswitch Engage and their ‘set the world ablaze’ concert. It’s an absolutely amazing performance and the energy is crazy!

TJ: I’d have to say Polaris in Cardiff with Architects. The most phenomenal performance I’ve seen. Absolutely outstanding.

Tom: Enter Shikari live at Alexandra Palace 2016. Give it a listen, it’s a ride.

Matt: I’d for sure send mine to Chris Carabba, he seems like the sort of dude you can trust.

Owen: Thinking logically, I’d send a message to any of the guys from Amon Amarth. They have that whole Viking theme going for them, which is sick, but also, you know, they’d probably know how to sail out to us and save the day.

Ethan: The person I would send a message in a bottle to would be Padge from Bullet For My Valentine, as he’d probably want to come and live there with us.

TJ: I’d send my message in a bottle to, not Ben Bruce of Asking Alexandria wishing him a happy birthday when I was 14 and never getting a reply.

Matt: Probably Ethan, the man’s one of my best mates but my god the boys can tell you how easy it is for him to wind me up, I feel like after one week I probably would’ve already killed him.

Owen: This is a hard one. I’m genuinely unsure, there’s a lot to consider. For some reason I reckon TJ would be the most likely to take one for the team. He’s a sweetheart so it’d probably have to be him. Sorry TJ, and cheers man.

Ethan: I wouldn’t really want to eat any of my band mates. But if it had to be done it’s going to be Matt and I think he knows that just as well as me.

TJ: Owen has the juiciest ass I’ve ever seen. Man has all cake, so sorry dude but you’re up.

Tom: Hate to say it but Owen could go a long way.

Matt: For me it would probably be Jacoby Shaddix, I always remember being a kid listening to his music and feeling super inspired to make my own.

Owen: If we’re going off influence here, I’d have to save Metallica’s James Hetfield. The dude is more or less the prime reason I started playing guitar in the first place.

Ethan: Leo Faulkner (Sleep Token). Although I haven’t been listening to them long, his vocals have blown me away. Every time I hear them it has motivated me to sing as much as often.

TJ: Whilst the ship was sinking, I saw Caleb Shomo of Beartooth, so I got us both to shore somehow.