Maceration are a name that I have never come across before and yet here we are, looking into not only their second full length release but what is effectively the relaunch of the band. Formed way back in 1990 out of Syddanmark, Denmark, the band were very quick out of the gates at releasing material with their Official Livetape in the same year before unveiling their debut full length, A Serenade Of Agony, just two years later. Maceration would go on to release a Promo in 1995 however before long, the band would cease to be. But much like the rapid beginnings, only last year Maceration reformed and just a few months ago we saw the first new track in decades from the band. Now, with a new album on the horizon and a signing with Emanzipation Productions, will this rebirth signal a new era for the band? Let’s dive into this album and find out.

It’s pretty interesting how Maceration unveil their guitar sound here. Opening up their record, they clearly want to demonstrate how there’s great swathes of power and energy to be discerned from their onslaught but very quickly, their approach relaxes and we’re left with a crunching style that feels more akin to the Swedish buzzsaw method than any more ripping tone variant. While there is speed to be had from their songwriting it’s not like Maceration could be labelled as total speed machines, they know how to regulate their pace whereby we are able to always keep up with what they’re detailing to us. I think, had Maceration increased the overall pace by which they play by just a few notches, the effect it would have on how we interpret their riffs would be crucially negative. Maceration certainly keep themselves in check and you can tell it would be more than feasible for them to explode and go wild, yet it’s the fact that they don’t which indicates a capacity for understanding what their sound is and how best for their audience to receive it.

It also lies in the guitar tone too. This isn’t the kind of guitar attack where you can feel every individual note or can sense the crunching weight bearing down on you; the guitar work here feels warped, not to the extent of more extreme and avant-garde works but just enough for us to recognise that there is something more than your typical riff tone happening here. It’s able to apply a keener edge of death metal than had the band merely doubled down on the bass within the mix or simply attempted to exert something more evil through their sound. It’s only a small thing, but it succeeds at pulling you into their maelstrom of a record that little more, immersing you to the point where, if you are a new listener like myself, you are fully on board with the rest of their record’s duration. We also can’t ignore how smooth the tone is either; it isn’t grating on our senses nor does it try and actively fight you. The transitions experienced between riff segments is seamless, especially as you have fierce vocals forever on top of them without either one element lacking as a result. 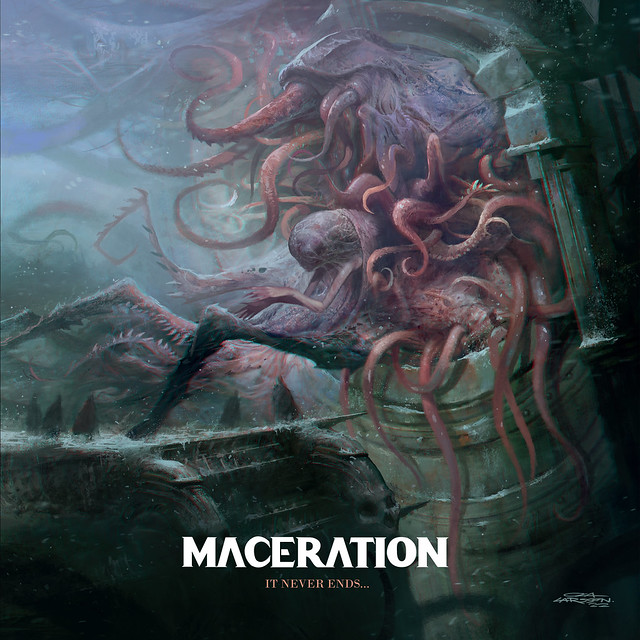 If there’s anything I’m surprised at, it’s the resounding absence of fanfare the band have attributed to their songwriting. Of course, once the band are playing and everything is firing on all cylinders, the songwriting is deeply entertaining and, as aforementioned, immersive. But on the whole, Maceration really don’t concern themselves with creating a prominent aura regarding their presence or songwriting; they never try and apply anything grandiose or meaningful towards this record which you think they would do considering it’s their first album release in three full decades. In a way, you have to give Maceration credit for making this record some form of triumphant return; they’ve simply come back and got on with what people would want them to do. There’s very little ego emanating out of this album. Tracks start up very easily and they end just as much before we move on to the next piece.

It’s quite striking as to how completely Maceration have managed to hold on to this old school flavour of death metal when they’ve been inactive for thirty years. I think, if we were to return and visit their debut work which released back in 1992, we would see a band whose style and atmosphere is extremely similar to what they still manage to sport with …It Never Ends. Their approach to riffs, the slow but trudging ambience of their sound that manages to pick up gradually and become the warped beast this record purports itself as, the utter lack of blast beats, opting for a more primitive drumming assault, it all paints a picture of a band who have been able to pick up precisely from where they left off and still offer something supremely confident and competent. I think it just goes to show that you can have an album that is as modern sounding as they come, but if your idea of songwriting is the old school variation then no length of time can dispel your desire for it.

In conclusion, Maceration’s first full length album in three decades is a roaring success as far as I’m concerned. Not only because I deem it to be a quality death metal release but because it did something any band would crave you to experience: the desire to check out their previous material. Following this album, my wish to check out their first record from way back when, A Serenade Of Agony, only grew and with the climax to …It Never Ends I might just do that. This album came out of nowhere and frankly I am all the happier for it and for the band, they’ve got something here that works that manages to be powerful and hard hitting without it barrelling down on our senses. My singular gripe would be that I think, at maximum volume, this record is way too loud but regarding the sensory input I had no issue experiencing everything the band wanted this record to be. It’s this rough and hard-edged work that manages to simultaneously be as smooth as volcanic glass. A great record for sure and one I’ll happily recommend to others should the question for new releases come my way.